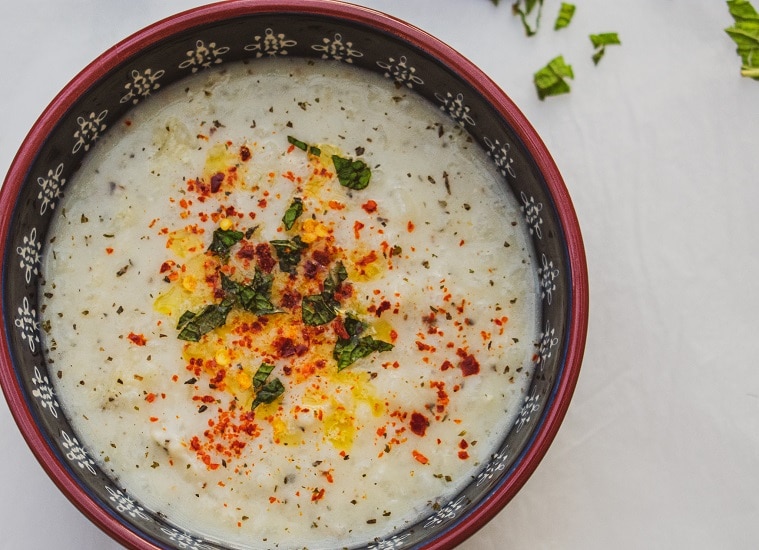 It is a delicious hearty soup, and the best part is -yayla soup recipe is awesomely easy.

Yayla Soup is one of the most popular soups of traditional Turkish cuisine. Sometimes it is called Highland Meadow Soup, or even Yoğurtlu Çorba. It is a delicious hearty soup, and the best part is -yayla soup recipe is awesomely easy.  You only need yoghurt, rice and a variety of herbs like mint, parsley, purslane.

Soup is an especially important part of Turkish cuisine, and there you will find a vast number of soups. Let’s just mention Mercimek soup, Ezogelin soup, Lahana soup, etc. which are very popular over there.

Yayla soup originates from the north of Turkey, from the Black Sea Region. There are mountains and green glades, hence the nickname highland meadow soup.  Actually, the name comes from the word Yaylalar which means high mountain meadows. Also, this area is known for the fact that dairy products are still traditionally produced, which are synonymous with top quality, especially yoghurt. And yoghurt is the main ingredient of this soup. Like other delicious soups, it has spread around, so you will find it in other regions of Turkey.

It is believed that the origin of this soup comes from Assyria. Today, in addition to Turkey, this soup is well known in Iraq, Syria and Iran cuisine.

In Turkey, this soup is considered in some way medicinal Therefore, it is very often used against colds or in the recovery period from illness. That there is something in that, by the fact that it is also on the menus in hospitals. Also, it can often be found on wedding menus.

It is served hot, mostly as an appetizer, and is most often sprinkled with herbs and paprika flakes.

Like other Turkish soups, I tried this soup for the first time while I was in Izmir. I was really blown away. The recipe for Yayla soup I got from my old friend Hido, who is a foodie like me. Maybe even bigger.