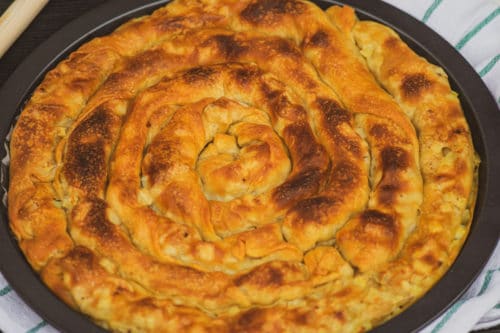 Potato pie or krompirusa is one of the classics of traditional Bosnian cuisine. It is a very simple dish made from a flat dough filled with potatoes.

Potato Pie or krompirusa is one of the classics of traditional Bosnian cuisine. It is a very simple dish made from a flat dough filled with potatoes. I think the simplicity of potato pie recipe and just a few basic ingredients make it so delicious and beloved.

For centuries, it has been a staple food in Bosnia and Herzegovina. There is hardly any house where it has not been made. Interestingly, traditionally it is considered a home-made speciality and you won’t find it in restaurants.

It is incredibly difficult to describe pie as a dish. All sorts of pies are made around the world from different types of dough, in different ways and with different fillings. Even etymologically, it is difficult to determine the origin of the word pie.

According to one theory, it comes from the Greek language from the word peptos which means cooked. Other theories state that the origin is from the Gothic or even German languages.

However, there is one crucial difference between the Bosnian and all other bureks. In Bosnia, the burek is made exclusively with meat. In Turkey and other countries, including countries in the region, burek is everything made of filo pastry and stuffing.

However, in the English language, the word pie has a slightly different meaning. It means a dish made with crispy, greasy dough with salty or sweet stuffing.

Potato pie is ubiquitous throughout Bosnia and Herzegovina, but also in Croatia and Serbia.

The potato pie is served hot or cold as a snack or at the end of a meal. As a snack, it is usually served with yoghurt.

I got this potato pie recipe in Sarajevo a few years ago when I visited my friend Adis. I already mentioned that he’s a foodie like me. According to him, this recipe is several centuries old.