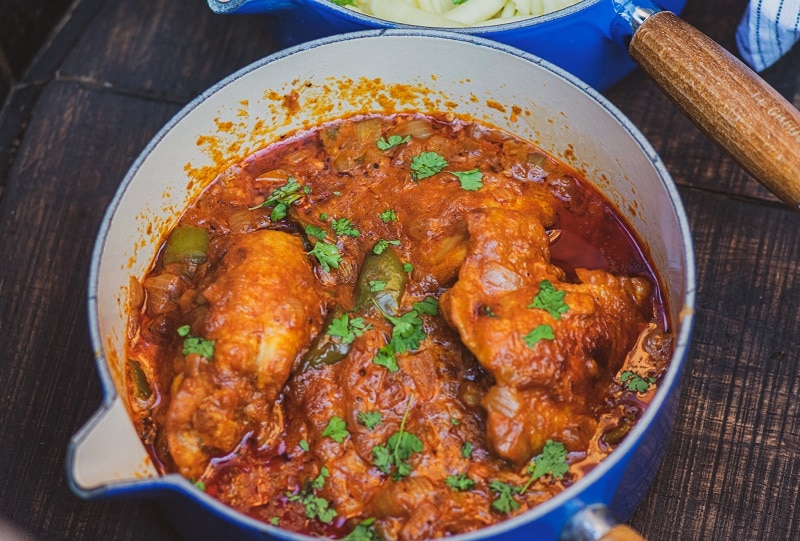 Chicken paprikash (Hungarian Csirkepaprikás) is one of those dishes that are a trademark of traditional Hungarian cuisine.

Chicken paprikash (Hungarian Csirkepaprikás) is one of those dishes that are a trademark of traditional Hungarian cuisine.

Chicken paprikash is very simple and quick to make. It is made of chicken, onion, peppers, sour cream and, of course, paprika. In literal translation, the word csirkepaprikás means paprika chicken, not chicken with paprika. There is a good reason for this because paprika is the most important ingredient here.

It is important to mention that paprika is a ubiquitous spice in Hungarian cuisine. The tradition of growing peppers goes back to the 16th century when the Ottoman conquerors brought peppers to Hungary. It quickly gained popularity here. Let’s just mention that vitamin C was isolated first in Hungary from peppers. Also, in Hungary grinding of dried peppers was “invented” and the result was – paprika. You can read more how peppers shaped the world we know in my blogpost – The history of peppers.

What is the origin of chicken paprikash?

There is no accurate record of how this dish was made, as is the case with Szekely goulash. However, it is generally thought to have originated in southern Hungary. The best peppers are grown around the towns of Szeged and Kalocsa and it is a logical assumption that paprikash originated there.

Dishes like this are also common in the cuisines of Croatia, Serbia, Slovenia, Romania. All those countries once were part of the Austro-Hungarian monarchy, and therefore the Hungarian influence is obvious. This dish can also be found in Bulgarian cuisine and even the Jewish one, where it was brought by Ashkenazi Jews.

Chicken paprikash is usually served with a broad noodle called nokedli or a wide noodle like tagliatelle, even with rice. Cucumber salad goes great too since they give a great counterweight to peppers.

What is the difference between goulash and paprikash?

Although these dishes seem similar, the ingredients, preparation and serving are different. Goulash is made of beef, veal or pork, which are slow-cooked. Also, it is a stew-like, serves as a meal to itself and paprika is just a spice in goulash. Chicken paprikash is made of chicken drumstick and thighs from older hens. Alongside with chicken, paprika is the main ingredient here. The preparation time is much shorter, and it is served with a side dish, mostly noodles.

It is interesting to note that Chicken paprikash has found its place in novels as well. In the famous Dracula novel, Jonathan Harker dined chicken paprikash while travelling to visit Grof Dracula.

I got a recipe for chicken paprikash from my long-time friend Gyula from Pecs.