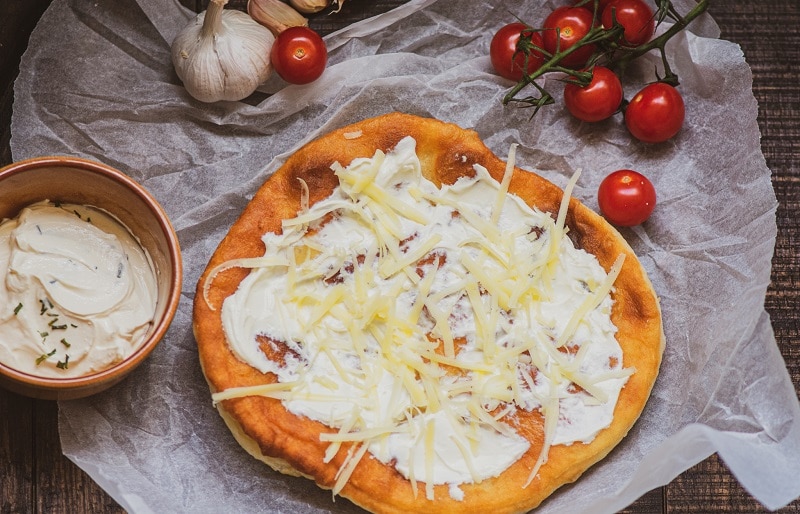 Langos is undoubtedly one of the trademarks of Hungarian traditional cuisine and the most popular street food treat.

Langos is undoubtedly one of the trademarks of Hungarian traditional cuisine and the most popular street food treat. This is ubiquitous deep-fried flatbreads, which are easy and quick to prepare.

It is most often served with sour cream and cheese stuffing, finely chopped garlic or garlic butter. Lately, street vendors and chefs have come up with new imaginative ideas, especially for toppings. Today you can find Langos as a stuffed hot-dog or even with mashed potatoes dough version. Toppings are countless from sweet to salty. Let’s just mention the most interesting – mushrooms, cabbage, omelette, stew, jam, cinnamon, icing sugar and many, many more.

Where is Langos from?

Hungarians consider Langos as Hungaricum, which means something that is uniquely Hungarian.

The name Langos comes from the word lang meaning flame. Although it is not prepared on an open flame (this is how pogacza is made), the name probably comes from the furnaces with open flame. It is considered to have been created as a by-product of pastry when baking bread. Then it was usually served as a breakfast.

Let’s mention that similar dishes called Lalanga existed in Byzantine and Ottoman cuisine. Lalanga even today exists in Turkish cuisine, and in Greece, it is known as Lalagia. In Hungary, however, Langos was reinvented. It ceases to be a sweet dish cut into pieces and served to many. Here it becomes a snack and it was served as a dish for one person.

Today you can find Langos in all towns and cities in Hungary. They are sold at stand-up snack shops, at markets, fairs, and there are also speciality shops serving only Langos.

Langos is very popular in almost all countries of the former Austro-Hungarian Empire. Under almost the same name we can find her in the Czech Republic, Slovakia, Croatia, Slovenia, Romania and Poland. In Serbia, especially in the northern part, it is called Langus or even more popular Mekike. A similar name is also in Bulgaria – Mekitsi. It is especially popular in Vienna, whereas in Budapest it can be found in markets and fairs. Especially popular are the stands in the Prater amusement park.

I got this recipe for Langos from my friend Imre from Pecs, who is foodie same as me.