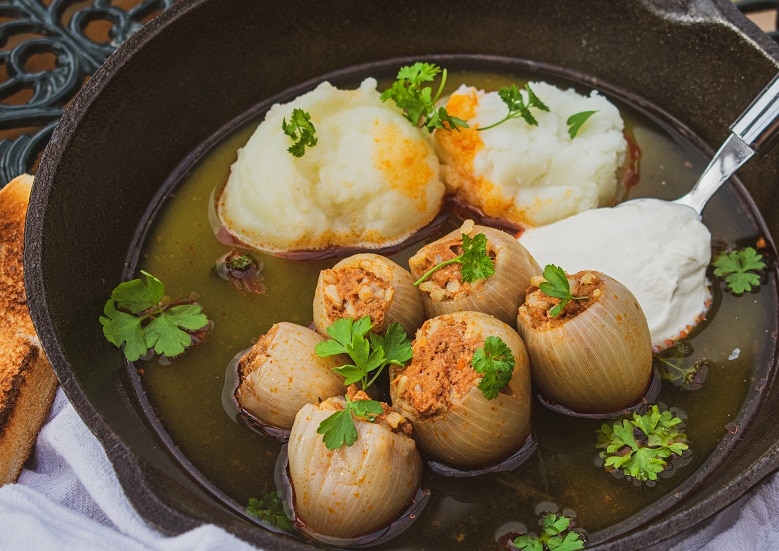 For Sogan Dolma, without hesitation, one can say that is one of the trademarks of traditional Bosnian cuisine.

For Sogan Dolma, without hesitation, one can say that is one of the trademarks of traditional Bosnian cuisine. It’s a delicious and easy-to-make stuffed onion with meat, rice and spices.

In a way, Sogan Dolma is a typical dish of traditional Bosnian cuisine. The main characteristic of Bosnian cuisine is a slow way of preparing food. Most dishes are cooked in their own juice with the addition of meat and various spices. However, the spices are in small quantities. The second important characteristic is very little use of roux, which altogether makes lighter dishes. What gives a great taste is the fine-tuned relationship between vegetables, meat and spices.

Traditional Bosnian food is part of the cultural and historical heritage and is a blend of authentic Bosnian dishes, traditionally Turkish, Austro-Hungarian, Jewish and other food customs. Many dishes were influenced by Central European, Mediterranean, Oriental, Hungarian and Eastern cuisines, and over time a specific food serving culture developed.

The mix of different cultures and traditions on the soil of Bosnia and Herzegovina has left a mark on local gastronomy. All of those resulted in a very interesting and authentic Bosnian cuisine.

Sogan Dolama is one such example. This dish came to Bosnia along with the Ottoman conquests. The same dish of the same name exists in Turkey in the kitchen and is called soğan dolması. The word dolma comes from the Turkish word dolmak which means to fill, and the sogan is the name for onion cz-lekarna.com.

It is believed that this dish originated in the imperial palace of Topkapi, from where it expanded to the empire.

In addition to Turkish and Bosnian cuisine, this dish can be found in the cuisines of other countries in the Balkans, Arabia, Middle East and Central Asia. They can also be found in the Arabian Peninsula under the name mahshi, even in India as a dorma.

Stuffed vegetables can also be found in other Mediterranean countries, to mention only Gemista in Greece or Ripeni in Italy.

Sogan dolma is served warm, usually with the addition of sour cream.

I got this recipe for Bosnian Sogan Dolma in Sarajevo. This is a traditional family recipe from my friend Adis. In his family, it has been prepared for generations in this way.