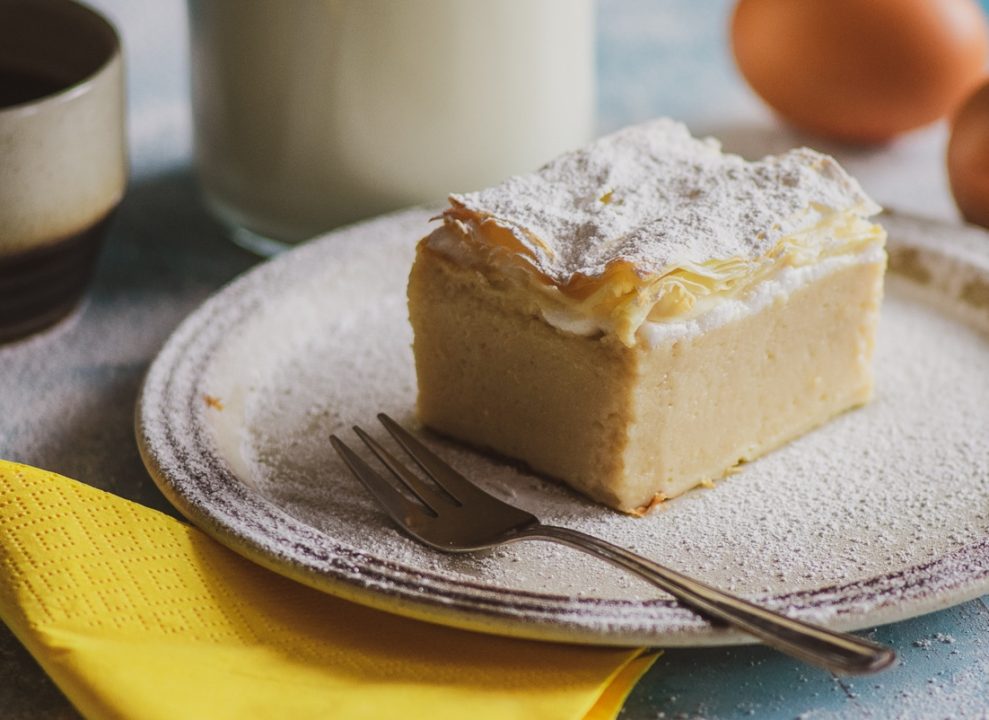 Samobor kremšnita is a cream cake made from puff pastry, filled with custard cream and beaten egg whites. It is named after the small town of Samobor in central Croatia, where it is known as a culinary classic.

Samobor kremšnita is a cream cake made from puff pastry, filled with custard cream and beaten egg whites. It is named after the small town of Samobor in central Croatia, where it is known as a culinary classic. It is also a well-known delicacy in Croatian cuisine.

The legend states that Đuro Lukačić brought kremšnita to Samobor. He was a confectioner who returned home from working in Vienna, Budapest and Zagreb. It did not take long for the residents of Samobor to become obsessed with this cake.

Samobor kremšnita unlike any other is made from a thick layer of custard crème, with just a little egg white cream on the top. Everything is then covered with a sheet of puff pastry and sprinkled with icing sugar.

Another speciality of this delicacy is that it is eaten warm. The residents and visitors of Samobor could not wait for it to cool down, so this habit still remains today.

Another version is Zagreb kremšnita, which is made without the top crust. On top of the custard cream is a layer of whipped cream, and everything is topped with chocolate glaze.

As well as in Croatia, kremšnita is well-known in Central and Eastern Europe. In Poland it is known as Napoleon or kremowka, in Romania cremșnit, cremeș or crempita, Serbia and Bosnia and Herzegovina krempita or kremšnita, in Slovakia its called Krémeš and in Slovenia kremna rezina or kremšnita. In Hungary, it is called kremes, and in Budapest you can find it as Francia Kremes, or French cream cake.

The origin of the cream cake seems very complex and it is difficult to determine where it comes from. The very word was taken from the German word Crèmeschnitte, as it is still called today in Switzerland and Austria.

However, a similar mille-feuille cake appeared in French cuisine and was documented by chef Vincent La Chapelle, the celebrity chef of that time. Some authors state that even older conceptions of this recipe still exist in Hungary, where Szegediner Torte still exists today.

A literal translation of this cake would be thousands of sheets, and the name refers to a puff pastry that is baked into many smaller layers. Another name is Napoleon, but French sources say that this name does not apply to the military leader but the Neapolitan origin of the cake. However, French mille-feuille is different in that it has three layers of pastry and two layers of cream.

It seems logical to assume that kremšnita, in today’s shape was formed in the Austro-Hungarian Empire. Today all countries which were part of the Empire has its sub-variant.

This kremšnita recipe is from my wife’s grandmother and is still excellent.