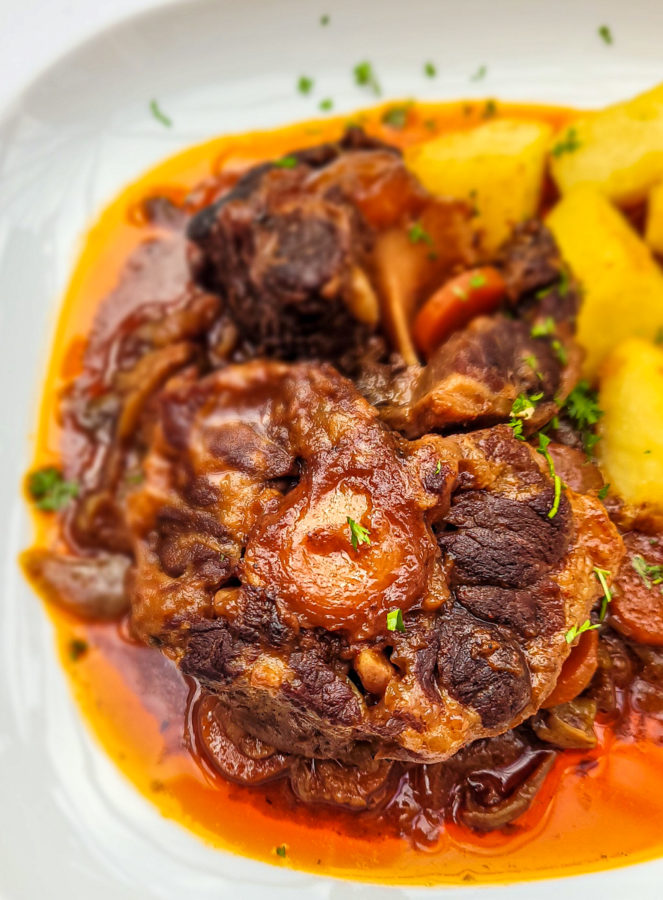 What is Oxtail Stew Made of?

The term oxtail may imply something different, but it’s nothing other than tail beef from no specific cattle breed. The oxtail stew is a delicious soup cooked with flesh from the tail of an ox. It tastes like typical beef stew, but the meat is more tender and silkier.

You’ve certainly tasted short ribs before, and the oxtail stew is just like it. If cooked properly, the stew should have a rich beefy flavour, and the oxtail will soak up the flavour of the ingredients you cook them with. Some of the components commonly used in preparing the stew include olive oil, green onions, onions, garlic, and ginger.

This recipe requires the cooking process to be slow, usually for several hours. Due to the fatty nature of the meat, many prefer cooking them at least a day ahead. However, modern cooking processes use pressure cookers to quicken the process.

Oxtail stew recipe, once prepared from cheaply available primary ingredient, oxtail, is today a rocker among chefs and leading restaurants worldwide.  The preparation is a bit strenuous but is the only way to experience the short ribs-like taste. Once the stew lands on your taste buds, you’ll appreciate why the effort is worthwhile.

What to Serve Oxtail Stew With?

Oxtail stew is a popular delicacy around the world. Different regions have their preferred way of serving it. But traditionally, it’s usually served with kidney beans and white rice. If you prefer to enjoy the delicacy the easy way, you can enjoy it with white rice. Others prefer enjoying it with egg noodles, potatoes, homemade bread, or just plain.

Oxtail stew recipe is believed to have been discovered by Flemish and French immigrants in London during the 1700s. Often with lots of fat and longer cooking time, the oxtail beef was traditionally very cheap and was often used to economize the other parts of an ox. They were often associated with peasants, but today they’re the hardest to come by and cost a lot.

Today, the recipe has grown in popularity and has many variants across different parts of the world, including Jamaica, Indonesia, Korea, Russia, and Spain.

It is also popular in the Asian continent—the Chinese call their cuisine niúwěi tang, which means ‘oxtail soup.’ The Koreans also have their variant known as kkori gomtang and is made to be extra thick and served with rice. The Indians, particularly those around Uttar Pradesh and Lucknow, call their cuisine dumghazah.

The Brits prepare their oxtail stew with carrots, onions, thyme, and celery. Since the meat is very fatty, it requires a lot of simmering time, but the work is generally minimal.

The Spaniards call their oxtail stew rabo de toro and is prepared with a bull tail meat, carrots, red pepper, cloves and several other spices.

The Russian oxtail Borscht stew is one of the most divergent oxtail stews as it uses many ingredients, including beetroot as the main ingredient, paprika, basil, black pepper, and many other ingredients. Many countries and regions have their own recipe versions but the primary use of oxtail meat is still retained.

What is over temperature?

I will give it definitely a try