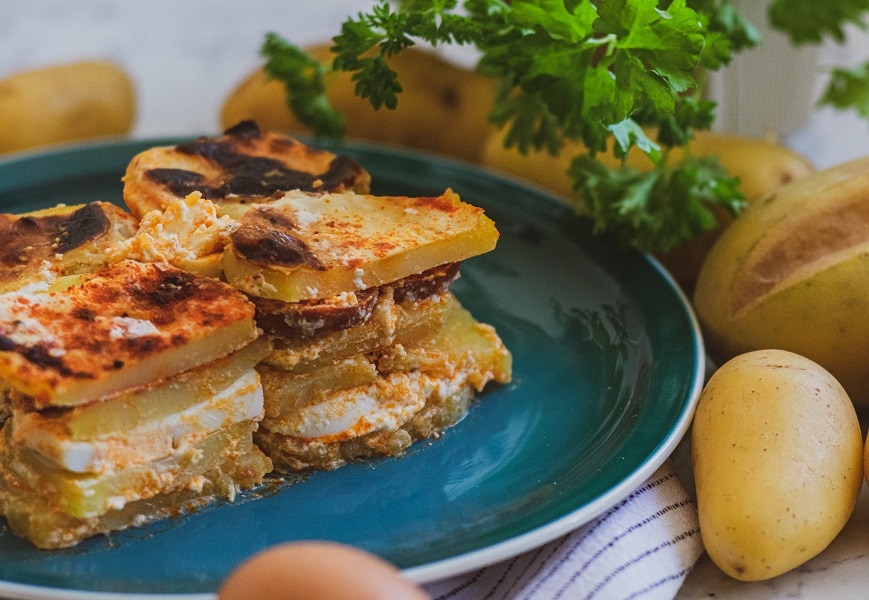 Rakott Krumpli or layered potato is a traditional Hungarian casserole. This is an incredibly tasty, quite simple and quick dish to make.

Rakott Krumpli or layered potato is a traditional Hungarian casserole. In literal translation, this means “pleated potatoes”. This is an incredibly tasty, quite simple and quick dish to make. It consists of only 4 basic ingredients – potatoes, sausages, eggs, and sour cream.

For the first time, this dish is mentioned in István Czifray’s Hungarian National Cookbook of 1840.

Rakott Krumpli is basically a very similar dish to Moussaka which is quite common in central Europe, the Balkans and the Middle East. It is logical to assume that Rakott Krumpli originated from Moussaka, especially if we know that Hungary was part of the Ottoman Empire in the 16th and 17th century.

I find it fascinating even today how the Ottoman Empire was a medium for the exchange of food. In addition to Moussaka, we must mention rolled cabbage, baklava, kofte and many other dishes that you can find in countries under the former Ottoman rule. On the other hand, all these dishes have some local variety that makes them unique. A fantastic example of how food connects people.

Namely, each of these cuisines has its variation of moussaka, and in Hungary, it is sausage, eggs and sour cream. In fact, these are the traditional Hungarian staple foods.

Rakott Potatoes are served mainly as the main course, with pickles or pickled beetroot as a side dish. Also, very often it can be found at large family gatherings.

Let’s just mention that this is a traditional dish of Hungarian Jews during the “nine days”. It is the first nine days of Av when Jews remember the destruction of the Temple. Then orthodox Jews refrain from eating meat.  Also, I would like to mention the French Tartiflette, as a very similar dish.

I got a recipe for Rakott Krumpli from my friend Gyula from Pecs, who is a foodie like me. Maybe even bigger. According to this recipe, Rakott Krumpli has been preparing in his family for generations.