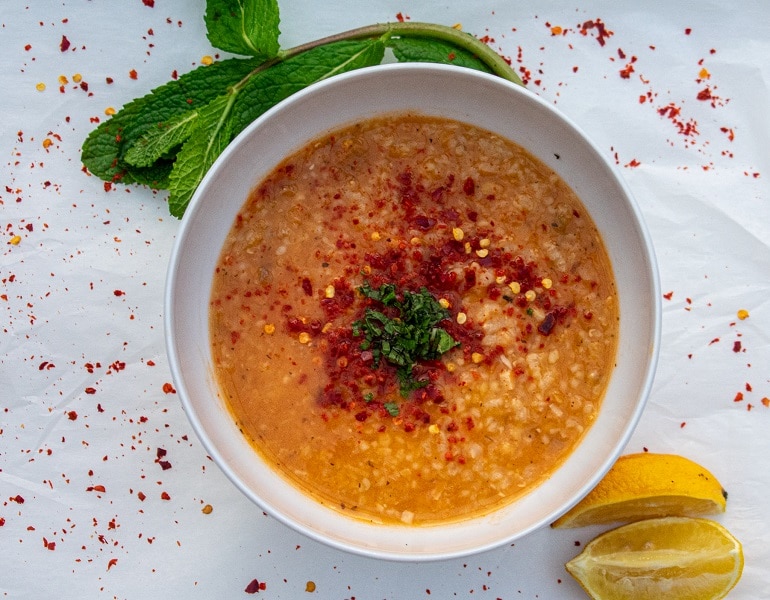 Ezogelin Soup or Ezogelin çorbası is one of the most popular soups in traditional Turkish cuisine. It is a delicious and hearty soup, made from red lentil, bulgur, rice with vegetables and herbs.

Ezogelin Soup or Ezogelin çorbası is one of the most popular soups in traditional Turkish cuisine. It is a delicious and hearty soup, made of red lentil, bulgur, rice with vegetables and herbs.

What is even more interesting is the story of the unfortunate young girl Zöhre and the way the soup was made and named. This story inspired artists and there are songs about Ezo, but also the movie and tv series Ezo Gelin.

Zöhre, or nicknamed Ezo, was a beautiful girl around whom many suitors hanged around. She lived in a village near the city of Gaziantep in southeast Turkey in the early 20th century. Because of her beauty, she was praised by many people, but her parents chosen a husband for her. At first, they lived happily, but because of the gossiping of envy people, her husband became cruel and violent. That came to the point where she was allowed divorce for harassment, which is unheard of at the time.

At the time, the divorced woman was not a desirable member of society, so her father decided to remarry her. Following the customs, she had to win the mother-in-law’s affection by showing her culinary skills. So, she made a soup from what she had, which was later called Ezogelin çorbası. Literally, this would mean the soup of Ezo the bride.

However, there was no love in that marriage. In the meantime, because of the war, the place where she lived became part of Syria. She was prevented from visiting Turkey and lived crushed for the rest of her life. The story goes that she died of tuberculosis in 1956. According to her wish, she was buried on a hill near the border, from where she can be near bellowed Turkey.

This is one of those dishes that originate from the southeast region but is popular throughout Turkey today.

Like almost all soups, Ezogeline soup is eaten as a warm appetizer before the main course.

I first tried this soup when I was in Izmir. I asked a local guide to find me a recipe for Ezogelin soup, and today I make this fantastic soup according to the recipe.