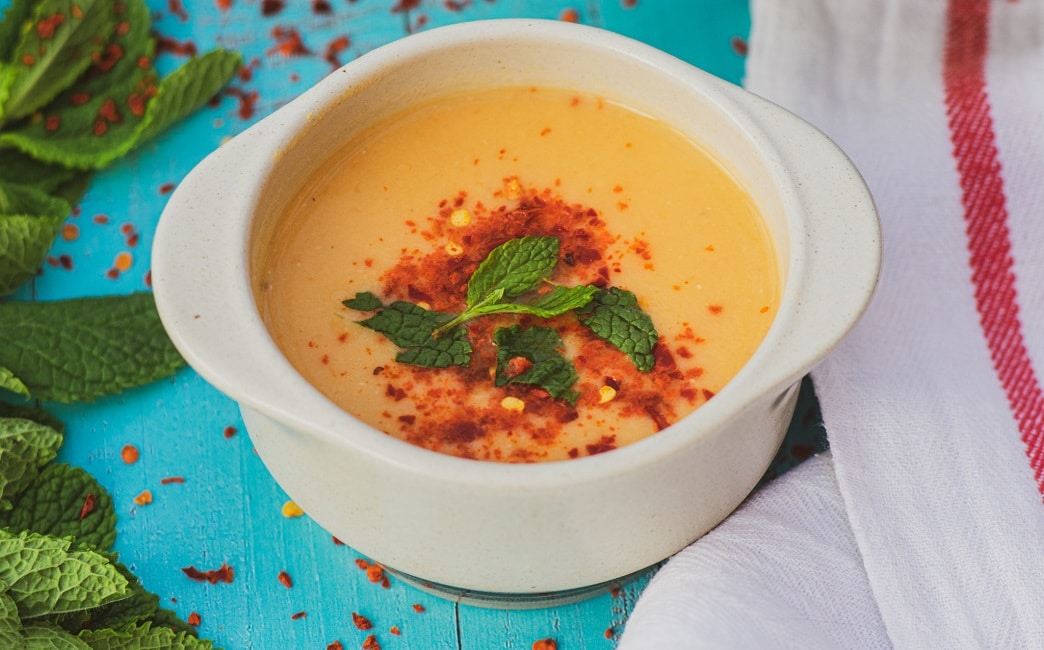 Red Lentil Soup or Mercimek Çorbası is probably the most popular soup in Turkish traditional cuisine.

Red Lentil Soup or Mercimek Çorbası is probably the most popular soup in Turkish traditional cuisine. This soup has been a staple food in Turkey for centuries. Red Lentil Soup recipe is simple and easy to make, but very hearty and tasty at the same time. It is made of red lentil, onion, carrot, potato, and spices.

The history of this soup goes back to the Neolithic times since lentils were one of the first cultivated plants. Archaeologists find evidence of lentil cultivation in Turkey in Çayonü dated at 6700 B.C. There are 58 different types of lenses in the world today, grown in different sizes and colours.

Along with growing crops, mankind has discovered soup. The first soups were made in hollow stones into which smaller hot stones were inserted until the soup came to a boil. And the lentils were quite convenient to make soup from.

Lentil soups are also mentioned in the first Turkish cookbooks. Mahmud Nedim bin Tosun in his book  “Aşçıbaşı” from the end of 19 century describes the lentil soup. In another “Housewife”, published 4 times from 1882 to 1907, you can find a trick and tips for making lentil soup. Specifically, it states that the lentils should be well washed and left in the water overnight.

Since lentils are grown throughout the Mediterranean, there are countless types of red lentil soup in almost all Eastern Mediterranean cuisines. You will find it if you visit Egypt, Cyprus, Greece, etc.

Red lentil soup is served during lunch or dinner as a warm appetizer, while in Anatolia it is also served for breakfast. It’s especially common on the tables during the winter months. You will also find it in almost every restaurant serving traditional Turkish cuisine.

Let’s just mention it is important to distinguish this soup from very similar Ezogelin soup.

I got the recipe for Red lentil soup, like many others, in Izmir. While I was there, for me it was a gastronomic discovery, and among other dishes, this soup impressed me. Being so popular it was not difficult for me to get the recipe.