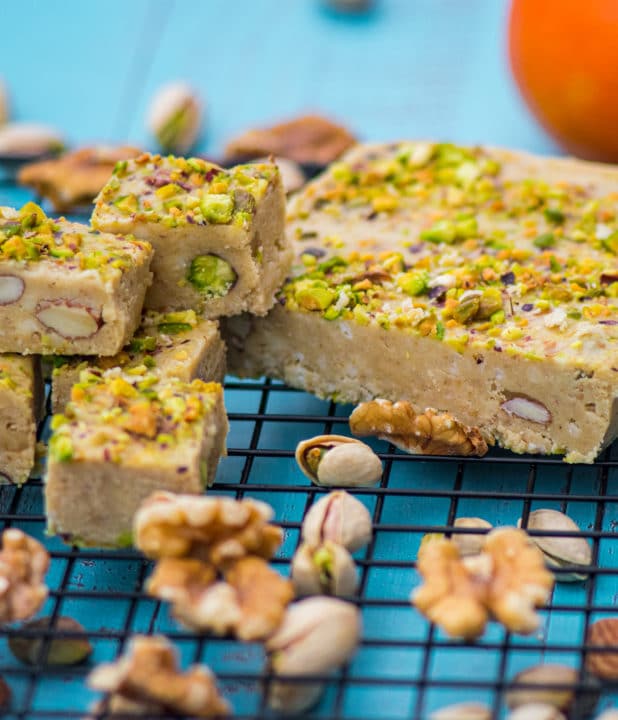 As Sweet As It Can Get: Tahini Paste, Walnuts, Pistachios & Sugar

Halva is a traditional Turkish dessert. Today, it can be found in almost all confectioneries and markets across Turkey.

Halva is not only common in Turkey alone. It is a well-known delicacy in the Middle East, India, West, Central Asia and North Africa. It is also well known in Eastern Europe and the Balkans.

Apart from Asia & Europe, Halva has traveled even to America, where Jewish settlers brought it.

Halva & Its Many Many Variant Recipes

There are so many different variants of the word Halva itself, such as Alva, Halwa, Halvah Halawa, Halava, Helava, Xalwa, Helva, Aluva, Chalva, Chałwa or Khalva, that you can’t even imagine how many Halva preparation  variants exist in the world. Since Halve has been domesticated in many cuisines, there are countless variations, depending on the area.

Also, as Halva is a treat or a fancy dish suitable for special occasions, it is prepared with the most expensive food ingredients across the world. Pistachios are common in Turkey, ghee and coconuts in India and saffron and rose water in Iran.

We want to point out to one thing. Halva presentation and the way of serving varies in different parts of the world. In Turkey, you get Halva in the form of small crunchy cubes, while in India, you would get a pudding or a paste like texture.

In some countries, Halva is eaten hot, while in others, it is eaten at room temperature or even cold. At the end of the day, all these variations convey only one thing, that people all over the world love Halva and have created their own versions to enhance their meals.

With such global popularity, a natural question would be how it all started. Although no one knows the exact origin, there are a few globally-accepted versions.

There are a number of theories where it originated from. Some say similar sweets can be found at 3000 BC when there are records of gelatinous sweets made with flour, oil and sugar. However, it is accepted Halva originated in the Arabian Peninsula, where its name came from.

In Arabic, ‘Halawa’ means ‘sweetness’ and Halwa means ‘sweets’ or ‘candy’. Its beginnings date back to the 7th century when it was made of dates and milk. Later, semolina, honey, nuts and various fruit sweeteners were added.

The Famous Cookbooks With Halva Recipes

The origin theories also get validation from ancient texts, therefore one way to believe in a theory is the dish’s mention in an old cookbook.

Halva was first mentioned in the 13th century in Arabia in the book Kitab al-Tabikh or The Book of Dishes.

Around the same time in Moorish Spain, one cookbook mentioned similar sweets made of flour, boiled sugar, honey and sesame oil.

So, even though they don’t give a conclusive verdict, they add significant weightage to Arabian origin theory.

The Royal Patronage Of Halva

One of the great admirers of Halva was the Turkish Sultan Suleiman II the Magnificent. Next to his palace, there was a special confectionery called ‘Halvahane’ or house of halva.

There were 30 different types of this dessert made every day. Here is the “discovered” version of sesame tahini.

Tahini halva, which is made with its base being sesame paste, quickly became popular throughout the Ottoman Empire. The walls were one of the nations that accepted the halwa, and thanks to none, it spread all the way to America.

It is important to mention that there are two basic types of Halva. One is flour-based and the other is sesame butter-based also known as Tahini halva.

Why Is Tahini Halva Healthy?

Many people feel that because it is sweet it might not be healthy, however that is not always true. The other ingredients matter as much as sugar.

Tahini Halva that we are preparing here is very rich in protein as it is made from sesame seeds. Further, it is also rich in calcium, phosphate and Vitamin E. You even get a lot of energy after eating it and therefore it is recommended for children and sportspersons.

However, too much of everything is harmful so if consumed in moderate quantities, it is healthier than many other desserts.

We have brought to you the authentic Tahini Halva recipe that we got from a friend from Turkey.

Although, you can easily make Halva at home, in Turkey, it is customary to buy it from a local Halva shop. So you can imagine that the local shops have some secrets which make it taste much better.

That is why, we have tried to bring one of those local Turkish recipes to make your Halva the best it could be without having to fly all the way to to Turkey.

So the variations are endless but if you want to start somewhere, we will suggest you start with our Tahini Halva recipe. We are sure that you will fall in love with the concept and try out the variations yourself.

Below steps will help you make this mouthwatering Turkish Tahini Halva with ease. So try it out and let us know in the comments how it turned out for you.