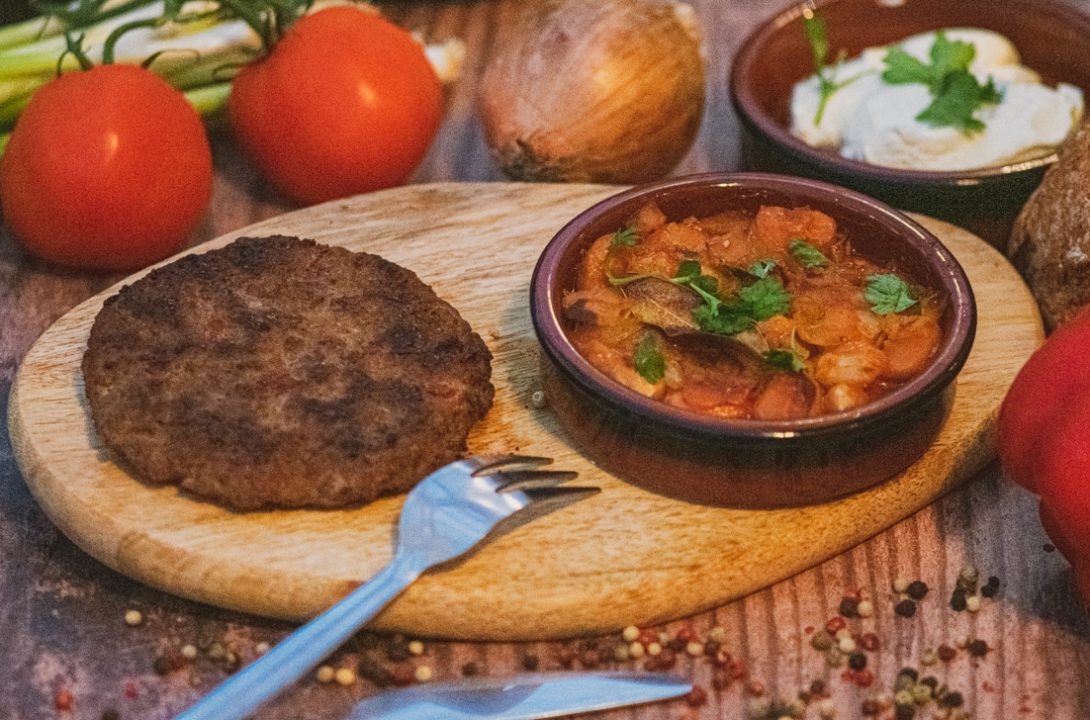 Pljeskavica is one of the most famous and widespread dishes in traditional Serbian cuisine. In Serbia, it is a popular street food that can be found in many booths.

Pljeskavica is one of the most famous and widespread dishes in traditional Serbian cuisine. In Serbia, it is a popular street food which you found in many booths.

It is usually cooked on a charcoal grill and is made from ground beef. Sometimes other meat such as pork or lamb is added, as well as paprika, bacon, etc.

Today, there are several different variations. The most famous is Leskovac pljeskavica, named after the town of Leskovac in southern Serbia. The traditional Leskovac Grill Festival is held there every year. In 2016 the largest pljeskavica in the world weighing 63 kg was made there.

As well as Leskovac, there are other variations such as Hajducka (pork smoked meat) or Sarska pljeskavica (stuffed with soft cheese).

The name pljeskavica comes from the way it is prepared. Namely, pljesak means clap hands.

It is assumed that this type of meat preparation came to Serbia from the Ottoman Empire. However, the origin of these dishes is rooted in the cradle of the first civilizations – Assyrian and Persian.

Sometimes it is called a Serbian hamburger. Apart from the shape, there are some important differences between the two dishes. Unlike hamburgers, which are made from beef and without spices, pljeskavica contains salt and pepper. Besides that, it has other additions such as onion, pepper, bacon, etc. Furthermore, it is much wider,  made of fattier meat and mixed longer to make the meat expandable.

We got our pljeskavica recipe from a friend from Novi Sad, a city from northern Serbia.

Pljeskavica sounds like something I would really like to try. I like that it contains spices and is likely to be tastier than typical burger meat. The thought of the record size of 63 kg is something hard to imagine but I like the history of this and would love to visit Serbia one day to try this traditional fare.

looks interesting. I have never eaten it before curious to try now

I bet my husband would love this. He is big into grilling, and this would be a fun new option that he could prepare and grill at some point in the near future. I’m going to send the recipe his way so that he can check it out!

Thanks for sharing. I love how you tell the origins of the food and not just the recipes!

Wow definitely learned something new from this! Didn’t know you could add baking soda to burgers. Never heard of this but this looks simple and easy to do plus something I can prepare ahead in the kitchen and just cook the next day!

Looks very interesting! I never been to Serbia before but would love to visit and try this local dish!

Pljeskavica looks absolutely delicious! Any dish with bacon included in it is definitely for me. I’m definitely going to save this recipe for later.

I have come to know about this dish from a Serbian friend, it’s something I wish to try since I am a Muslim and can’t eat pork, I can use only beef for the patty. Thank you for the recipe. Love from Malaysia. ‍♀️