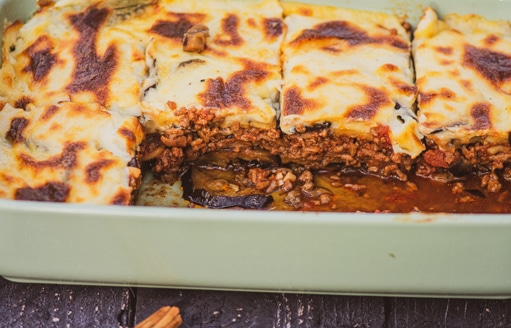 Moussaka is, without a doubt, synonymous with traditional Greek cuisine. It is hard to imagine a gastronomic guide to Greece which doesn’t mention moussaka.

Moussaka is, without a doubt, synonymous with traditional Greek cuisine. It is hard to imagine a gastronomic guide to Greece which doesn’t mention moussaka.

Greek moussaka is an oven-baked, multi-layer casserole made of sautéed aubergines, minced meat and Bechamel sauce. The traditional Greek recipe was created in the 1920s by Nikólaos Tselementés. He is probably the most prominent Greek chef and food writer. Today, he is a household name across Greece for his cookbooks and skill in the kitchen.

At that time, influenced by Western trends and political circumstances, Tselementés wanted to distance Greek cuisine from that of Turkey. For this reason, he created a moussaka which consists of several layers and he also added Bechamel sauce. Tselementés is also credited with introducing whipped cream, jelly recipes, canapés and the food decoration techniques into Greek cuisine.

Let’s just mention that there is a significant difference between the Turkish and Greek versions of this dish. Namely, the Turkish version is not layered and baked and looks like stew made of equal parts auberigine, tomato, onions and minced meat, and is usually served with the Turkish version of pilaf.

The origin of the moussaka has not been thoroughly documented. However, it is widely accepted that the moussaka originates in the Arabian Peninsula. Specifically, in A Baghdad Cookery Book (Kitaab Al-Tabikh) from the 13th century, there is a recipe for a very similar dish called musakhkhan. It is likely that the name moussaka is derived from the Arabic word ‘musaqqa’ which literally translates to ‘something that is fed liquid’. Even today, it is a popular dish in Egypt and in the Levant countries, where it is made as a vegetarian dish.

With the Ottoman conquest of the Arabian Peninsula, moussaka made its way to Turkey, and hence spread throughout the empire. A writer by the name of Turabi Efendi published a 1862 book called The Turkish Cookery Book, where he mentioned moussaka innhold. It’s believed that this is how moussaka came to Greece.

We must mention that moussaka is a very popular dish in the cuisines of Bulgaria, Romania, Albania, Serbia and Macedonia. In these cuisines, instead of aubergine and minced beef or lamb, potatoes and minced pork are usually used.

I got this recipe for Greek Moussaka from a local lady when I was in Thessaloniki a few years ago.