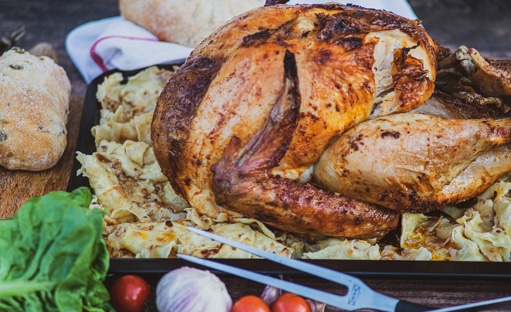 Turkey with mlinci (purica sa mlincima) is a classic, traditional Croatian cuisine, especially in Zagreb and northern Croatia. It is marinated and oven-baked turkey, made with a native variety of Zagorje turkey. Traditionally, it is served with thin-dried flatbread called mlinci.

Purica with mlinci originates from Medimurje, an area in northern Croatia. According to the dialect there, it is called pura z mlinci. This dish is believed to have originated in the 16th or 17th century, when Pauline monks introduced turkey farming to Croatia. As a Catholic order, they were dedicated specifically to education and agriculture. Among other things, they expanded the breeding of turkeys, from which the indigenous variety, the Zagorje turkey, originated.

The meat of this kind was so popular that it was served at the British and Austro-Hungarian royal courts.

Mlinci served with poultry can also be found in neighbouring Slovenian and Vojvodina cuisine. However, purica with mlinci is an authentic Croatian dish, since it is made from an indigenous variety of turkey.

Today turkey with mlinci is regularly served at family gatherings and holidays, especially at Christmas. In Zagreb and northern Croatia, it has somehow become a symbol of Christmas.

This recipe for turkey with pastry is from my wife, that she has inherited from her mother and grandmother. In other words, this recipe is at least a century old, if not older.

My husband spent many years as a commercial farm manager on a turkey farm. As a result, he grew pretty tired of turkey in general. However, have found that new, interesting recipes like this still catch his attention. I’m going to have to try making this for him sometime soon!