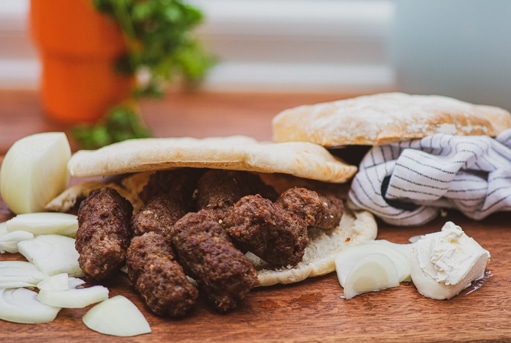 Ćevapi is, without any doubt, the most popular dish in Bosnian cuisine. What pizza is to Italians, hamburgers to Americans, fish & chips to the English, ćevapi is to the people of the Balkan. It is so popular it can be served as breakfast, lunch or dinner.

Ćevapi is, without any doubt, the most popular dish in Bosnian cuisine. What pizza is to Italians, hamburgers to Americans, fish & chips to the English, ćevapi is to the people of the Balkan. It is so popular it can be served as breakfast, lunch or dinner.

In each town and city, you will find countless ćevabdžinica – or restaurants serving “their own” version of ćevapi. Sometimes it is also called ćevapčići, which is diminutive of the word.

Ćevapi is basically small pieces of rolled grilled minced meat. Which is often served in a somun or pogaca (Balkan version of flatbread) and accompanied with chopped onion and sometimes sour cream and ajvar.

It is also extremely popular in Serbia, Croatia, Macedonia and Montenegro, and even Bulgaria and Romania. In Romania, they are called Mititei or Mici which means small ones. But unlike ćevapi from the former Yugoslavia, they are slightly different as they contain more spices and is served differently.

Ćevapi originates from present-day Bosnia and Herzegovina, while it was under Ottoman rule. The word ćevap is actually the Bosnian version of the Turkish word kebab. It can be said that they are a kind of Balkanized version of Turkish kofte kebab.

Legend has it that they were created by the hajduks (renegades from the Turkish authorities). They “invented” the hajduk ćevap by baking finely chopped meat on an open fire.

Records of similar dishes can be found in ancient Greece. Even Homer mentioned it in the Iliad and the Odyssey.

At the beginning of 20th Century, ćevapi spread to southern Serbia, and by 1860 it had reached Belgrade. In the second half of the 20th century, their “conquest” of Croatia and Slovenia began, where they are still one of the most popular dishes today.

Over the course of time and countless variations, several of the most popular filtered out, such as:

This recipe for ćevapi came from Adis, an owner of a kebab shop in Sarajevo.

Wow I have never heard of this dish before, how interesting. Sounds like it’s a “famous” dish in Bosnian Cuisine.

This was really interesting. I’ve never heard fo cevapi before, but it sounds like something my husband would LOVE. He’s always interested in trying new foods and exploring recipes that are outside of his usual routine. I’m sending this his way!

I have never heard of this dish. I had a plan to visit ex-Yugoslavia this year which didn’t happen. I will definitely try again and will make sure to eat this dish

I have never heard of Cevapi before, but I would definitely like it. I have had kofte kebabs before and enjoyed them.

Great recipe. I wonder what’s the difference between using sparkling water and regular water, does the meet taste different?

looks like a very interesting dish! i have never tried it or anything like it before. curious!

I’ve never heard of Cevapi before, but it sounds DELICIOUS! I love minced meat, flat bread *and* sour cream, so I’ll definitely have to put this on my list of new foods to try

It looks pretty delicious. Great to learn more about (and how to make) a traditional Balkan dish!

In Romania there is also something very similar, also made from lamb / beef meat. This is never missing from a summer bbq .

Wow! This looks delicious. I have never tried cevapi but I would love to try. Will check if I can get minced lamb in the market. Thank you for sharing the recipe.