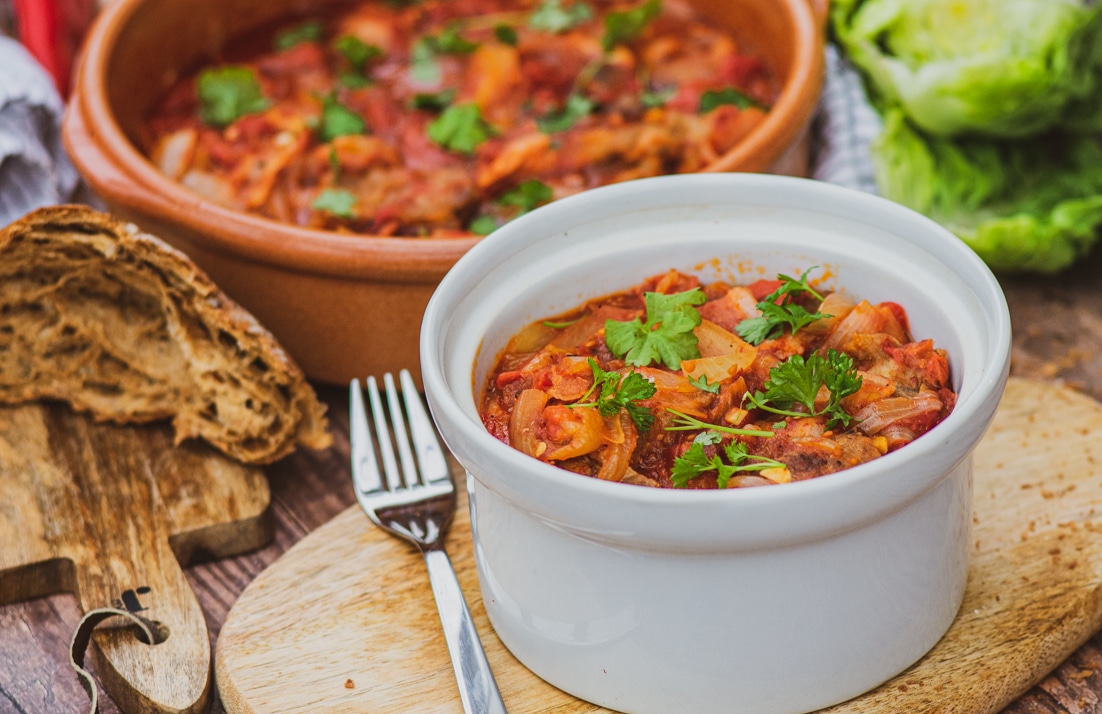 Mućkalica or Leskovac mućkalica is one of the most popular dishes in Serbian cuisine. It is a kind of stew, which is made from leftover barbecue meat baked in a vegetable sauce.

Mućkalica or Leskovac mućkalica is one of the most popular dishes in Serbian cuisine. It is a kind of stew, which is made from leftover barbecue meat baked in a vegetable sauce.

The origin of this dish comes from the town of Leskovac in southern Serbia. In addition to mućkalica, Leskovac is known for its barbecue, ajvar and the Leskovac grill.

The name comes from the Serbian word mućkati, meaning shake, mix, combine.  Because of the wide meaning of the word mućkati, there are two theories why mućkalica is so called.

According to the first theory, the name comes from the very fact that the dish contains remains of yesterday’s barbecue and vegetables like peppers, onion, garlic, tomatoes, etc.

Another theory states that the secret of mućkalica is to shake the pot in which the food is prepared. You shouldn’t stir it, only shake it.

According to legend, mućkalica was first made in 1967 by Miodrag Gligorijević – Bure. He was a famous Leskovac grill master. Legend has it Gligorijevic made this dish for Josip Broz Tito, then president of Yugoslavia, during his visit to Cairo. Later he cooked for many other statesmen and kings, and especially his dishes liked Queen Elizabeth II.

There is another legend that says mućkalica was invented by one of the Leskovac BBQ chefs who worked at the Kumbara restaurant. He made it for the guests who were returning from weddings to Belgrade on Sunday morning.  They wanted to eat something and the barbecue did not work at the time. So he used the remains of the grill from last night, combined them with vegetables and served as a warm dish.

Leskovac  Mućkalica Day is held every May in Leskovac, and in 2017 it was made for more than 4000 people.

Apart from Leskovac, different variations of the dish are also being made in other parts of Serbia. Beside Leskovac the most famous is from the town of Toplica.

It should be served warm with flatbread, cheese and shopska salad. Don’t forget it should be a bit spicy and its trademark is chilly pepper.

I got this mućkalica recipe from a barbecue enthusiast from Leskovac.