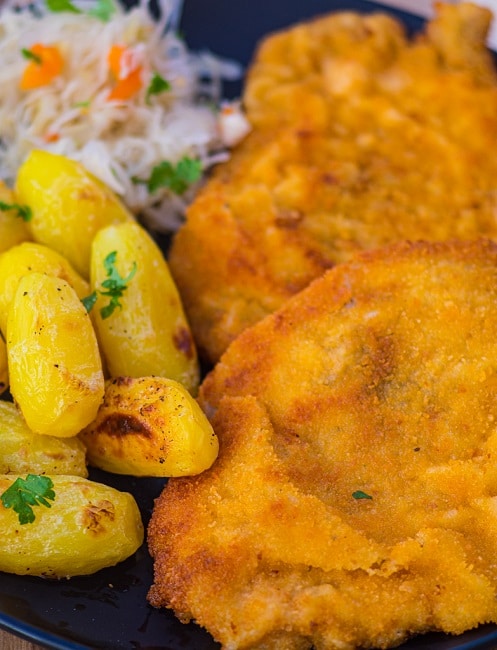 Kotlet Schabowy is a traditional Polish dish that comprises a pork cutlet made crispy by coating it with breadcrumbs then fried to give you a delicious treat.

What is Kotlet Schabowy?

Kotlet Schabowy (pronounced KOHT-Let s-HA-bow-vey), is a traditional Polish dish that comprises a pork cutlet made crispy by coating it with breadcrumbs then fried to give you a delicious treat.

Lovers of Polish cuisines will appreciate how rich the food culture is in this country. From its interactions with many other cultures, Poland adopted many culinary traditions including kotlet schabowy recipe. The country boasts of delicious dishes, some of which have also crossed borders into other cultures.

How do you serve Kotlet Schabowy ?

Different Polish families have their preferred way of serving this fried pork bread. Most homes will serve it with buttered potatoes. It may be garnished with some caramelized onions, dill and applesauce. During summer, kotlet schabowy may be accompanied by cucumbers and sour cream.

Before the Polish-Soviet war era, the Poles’ traditional cooking styles were deeply rooted and famous. Then encroachment of the Communists brought about many changes that saw the cooking traditions overlooked as new ones introduced.

Through the changes, kotlet schabowy became a Polish star dish, originally referred to as the perfect Stakhanovite dish. After the communist era, the elite disregarded this dish.  Today, the dish’s long-lost glory is bestowed, and many Poles now regard it as their traditional dish.

For centuries, the Poles were known to breed pigs, but kotlet schabowy missed out on the Polish culinary scenes. During the 17th century, many Poles both elite and peasants disregarded pork, while figatelli (the Sarmatian meatball) and other refined meat were a preference. They regarded it as a working man’s meat.

Research conducted on the old Polish culinary customs by professor Jaroslaw Dumanowski revealed that the belief that pork was an essential ingredient in Polish cuisines isn’t true. Pork started to gain acceptance not so long ago, with the change being attributed to the Polish nobility’s old cuisine losing its fame.

Kotlet schabowy recipe found its way into Poland in the 19th century, finding a culture of pork disregard already in place. Despite the Polish schnitzel having started to feature in cookbooks, both peasants and the noble would not readily accept it yet. The dish faced much turbulence and rejection while trying to take over as Poles’ main dish.

The narrative started to change when the new wave of pig breeding came in after World War II. During this era, Poland rose to become the largest producer of pork in Europe. Kotlet schabowy found a space to thrive to become a favorite dish among the Poles.

In Cuisines From Around the World

Up to date, there is no single pork cutlet that has been as divisive as kotlet schabowy. Some considered it a sign of culinary barbarianism. For others, it’s a Polish culinary custom.

A common term, ‘kotleciarze’ (meaning cutlet lovers), came to be, and was used to refer to those who cherished it and any other foods that emerged during the communist regime.  During the regime, pork cutlets coated with breadcrumbs became a favorite dish in bary mleczne (milk bars), which were restaurants owned by the state.

Today, the popularity of Polish Schnitzel has grown all over the world. Different cultures adopted the Polish recipe and came up with other varieties of the dish. In Poland, when turkey tenderloin is used in place of pork, it’s known as kotlet z indyka.

The Japanese variety of kotlet schabowy is called tonkatsu.  The Japanese cuisine uses almost the same recipe but is served with brown sauce and thinly sliced green cabbage.

In Austria, their cuisine is famously known as schnitzel, which involves frying thin pork cutlet that has been breaded. Pork is widely common in Austria, but some Austrian families prefer using veal. In such a case it’s called Viennese Schnitzel and is served with sliced lemons, which are squeezed over the delicacy.

Over the years, the popularity of this traditional Polish delicacy continues to rise. Kotlet schabowy recipe has expanded its reach and is now popular in restaurants serving Polish cuisines outside Poland.