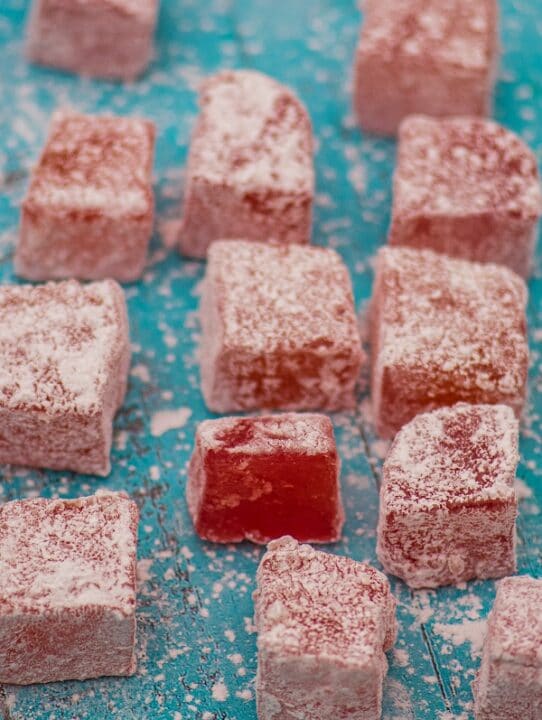 Lokum, in the popular culture known as Turkish Delight, is a world-famous Turkish sweet.

Lokum, in the popular culture known as Turkish Delight, is a world-famous Turkish sweet. It is an indispensable part of traditional, and contemporary Turkish cuisine as well. In Turkey, you can find this little gummy sweet in myriad colours and flavours of candy shop windows.

What is Lokum Made Of?

The base of lokum recipe is sugar and corn starch, to which numerous flavours and colours are added. This leaves a lot of space for the imagination. However, some flavours are still bestsellers such as rosewater, orange blossom, mint and lemon. You can also find lokum with countless fillings. Immensely popular are fillings with chopped or whole pistachios and almonds.

What Does It Mean in English?

The name lokum comes from the Arabic word luqma (t) which means mouthful and phrase rāḥat al-hulqūm, which means “comfort of the throat”.

Legend has it that lokum was invented by Confectioner Bekir Effendi, better known as Hacı Bekir. In 1777 he moved from the city of Araç in the north of Turkey to Istanbul. There he opened his confectionery shop. At first, he traditionally made them using flour and molasses as a sweetener. However, with the industrial production of sugar and the discovery of starch Haci Bekir began to use them. In this way, lokum, as we know it today, was created.

Word of his sweets spread to the Imperial Court, where the Sultan appointed him Chief Confectioner of the Palace. His merits were so appreciated at court and he was even decorated with a medal of honour.

After his death, the family continued the business, and the company is still owned by his family.  Currently, the 5th generation is running the business. The company is one of the oldest in Turkey and among 100 oldest in the world.

Haci Bekir gained fame during his lifetime, so his portrait can be found in the Louvre today. Well deserved, if you ask me. Yet he has made the lives of many at least a little sweeter.

Recently, theories have emerged that say that this sweet has existed before in Ottoman and Persian cuisine. Either way, I like the legend of Haci Bekir.

Around the same time when its popularity emerged in Istanbul, one of the visitors brought it to England. Here it is called by the name under which it is known even today – Turkish Delight. Thanks to immigrants from the Ottoman Empire, it spread all over the world. Today is well known in both North and South America and Australia.

It even served as the basis for jellybeans and found its place in popular culture. Namely, in the book The Lion, the Witch and the Wardrobe, which is the first part of The Chronicles of Narnia, one of the main characters seeks Turkish Delight as a witch’s wish. Let us also mention that some popular perfumes are named after him.

Thanks to the Ottoman Empire, the lokum spread to other parts of the empire where it has remained popular to this day. Let us mention only ḥalqūm in Libya, Saudi Arabia, Algeria and Tunisia and malban in Egypt and Lebanon. In Greece it is known as loukoumi, and in Bosnia and Herzegovina, Albania and Israel are Rahat Lokum. In Croatia and Serbia, it is known as ratluk, while in Bulgaria as well as in Turkey it is lokum.

There are no quantities in this recipe. I’d love to try it bacause the steps are very clearly illustrated and seems easy to follow.