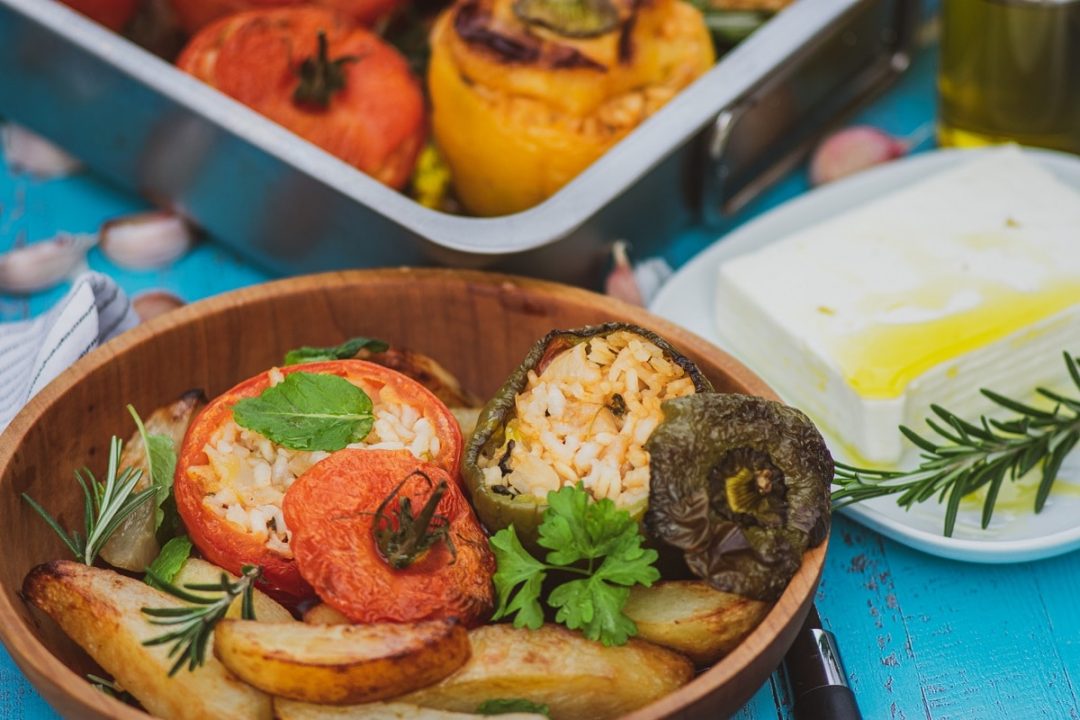 Gemista or yemista is a well-known dish in traditional Greek cuisine. It is peppers and tomatoes stuffed with rice, vegetables and herbs, baked in the oven.

Gemista or yemista is a well-known dish in traditional Greek cuisine. This is a very popular dish, traditionally prepared in the summer, since it is made using a variety of vegetables. In Greek cuisine, it belongs to a group of dishes known as Ladera (Lada meaning olive oil in Greek). Unsurprisingly, it is made with a lot of olive oil.

Gemista is peppers and tomatoes stuffed with rice, vegetables and herbs and baked in the oven. As with many other traditional dishes, this has countless variations. Almost every family in Greece has its own special recipe. Sometimes instead of tomatoes and peppers, you can find stuffed onions or aubergines. Likewise, the vegetables used for stuffing vary and often depend on the region in which Gemista is made. For example, pine nuts and raisins are added in the Mediterranean part of Greece, while minced beef or pork is much more common in the North of the country.

The name Gemista comes from the verb ‘gemizo/yemizo’ (‘γεμίζω’) which means filled or stuffed with. It is assumed that Gemista became popular in Greece after WW1, when it was introduced by the Greeks who escaped from Turkey after the Greek-Turkish War. In Turkish cuisine, stuffed dishes such as sarma and dolma are very common.

However, stuffed peppers are also popular in many other cuisines around the world. We have already mentioned Turkish dolmas, but stuffed peppers can also be found in Iranian cuisine, where they are called Dolmeh Felfel. They are also found in the cuisines of Central Asia and the Middle East, and all the way to India. There you can try a variety of different stuffed peppers called Bharwan Mirch.

Stuffed peppers are also popular in northern Europe, throughout Scandinavian and Baltic cuisines. They can be also found in Spanish and Italian cuisines.

The dish is also popular across North America, especially in Mexico, where popular examples include jalapeno poppers and Chile Relleno.

I got this recipe for Gemista from a local lady when I visited Thessaloniki a few years ago.