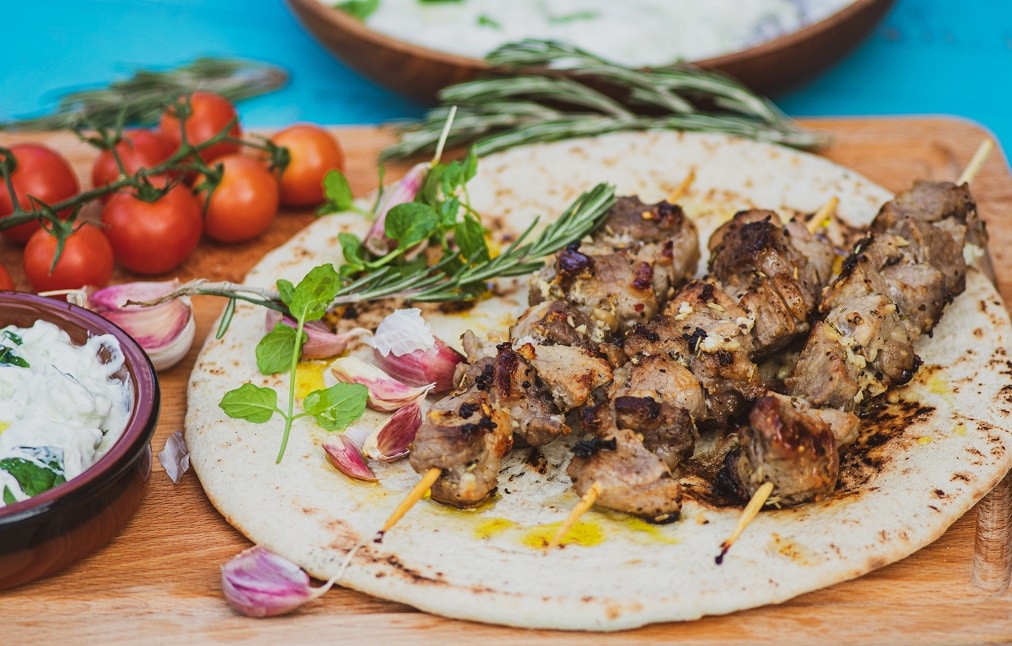 Souvlaki is probably the most popular dish in Greek cuisine. Most certainly, it is the most spread one. Souvlaki is a traditional dish which is fast food at the same time.

Souvlaki is probably the most popular dish in Greek cuisine. Most certainly, it is the most spread one. Souvlaki is a traditional dish which is fast food at the same time.

It’s marinated pieces of meat baked on skewers. Although most often made of pork, they can be found in many other variants. It’s not uncommon to find chicken, beef, lamb, sausage and even halloumi souvlaki. There are also vegan versions todayindegenerique.be.

Most often they are served with pie, bread and tzatziki – traditional deep. Today, however, they can be found served with onion, French fries, tomato, lettuce, cabbage or many other combinations. How they are made and served largely depends on what part of Greece you are in. For example, in Athens it is called Kalamaki which means small reed. The word souvlaki in Athens is a common name for all kinds of pita wraps.

The word souvlaki comes from the Latin word subula which means skewer.

The origin of souvlaki is not easy to determine. In fact, in many civilizations, you can find similar dishes.

There are many theories about its origin, but the most likely is that it was “invented” by soldiers who roasted pieces of meat on their swords by the fire. This explains why it is so widespread across the world but under different names.

There is a shashlik in the Caucasus and Central Asia region, the name of which also contains shash or shish for skewer. There is also kebab in Turkey, also an extremely popular dish in national cuisine. Skewer or kebab is well known in Asian cuisine as well, such as in Pakistan, Bangladesh, Iran, India and the Levant.

Let’s mention, in Spain the skewer is called Pincho Moruno, in Portugal Espetada, in France Brochette, and in Italy Arrosticini. In Arabic, it is called Lahm Meshwi, in the Balkans Raznjici and in Romania Frigărui.

In Japan there is a similar dish called Yakitori and in Southeast Asia it is Satay.

However, one thing is sure, the souvlaki was known in the area of present-day Greece in the 17th century BC. Namely, on the island of Santorini in the archaeological excavations, a tool for making of souvlaki was found. Also a few centuries later, the Mycenaean culture knew the meat roasted in spices.

In the period of the so-called Classic Greek similar dish was known as ὀβελίσκος (obeliskos). Their popularity is perhaps best witnessed in the works of Aristotle, Aristophanes and Xenophon. In the Byzantine Empire there were the “hot meat shops” in Constantinople selling the ancestors of today’s souvlaki.

Even famous Gustav Flaubert, in the mid-19th century, noticed ubiquitous souvlaki as he travelled through central Greece. He described them as “grilling pieces of meat on a bamboo stick”

Although today one of the synonyms for Greek cuisine is interesting to mention that until after World War II they were delights only in central Greece. It was not until the 1950s that their “conquest of Greece” began.

I received this souvlaki recipe from my friend Kostas from Thessaloniki.