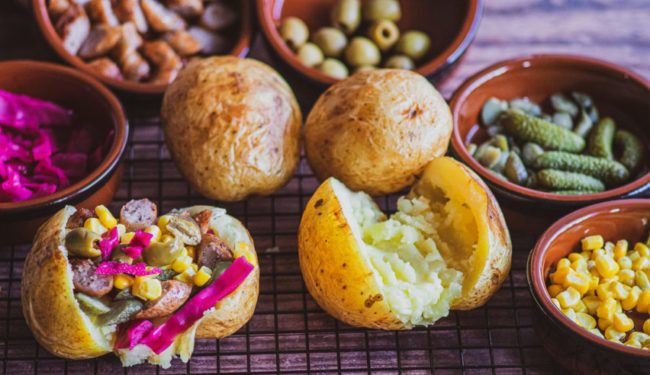 Kumpir is a very simple and popular street food dish in Turkey. It is actually a Turkish version of baked potato or jacked potato as it is called in the UK. Unlike the jacked potato, which is usually served with cheese, beans and butter, there are many different side dishes to go with the potato.

Kumpir is a very simple and popular street food dish in Turkey. It is actually a Turkish version of baked potato or jacket potato as it is called in the UK. Unlike the jacket potato, which is usually served with cheese, beans and butter, there are many different side dishes to go with the potato.


As mentioned before, Kumpir is served with a variety of different toppings and combinations, depending on what you like. Some of them are shredded sheep cheese (kasseri or kaşar), mushrooms, butter, pickled cabbage, sliced beets, sweetcorn, black olives, and many more. It is not uncommon to find sausages or some other type of meat among the fillings.

Kumpir is especially popular in Istanbul, where there are countless street stands serving it. The best place to try it is thought to be in Istanbul’s Ortaköy district, located on the coast of the European part of the city. In addition to tasting the potatoes, there you can enjoy watching their preparation, which is a kind of art performance.

Kumpir as street food is widespread in other cities as well, especially in tourist cities such as Izmir and Ankara.

Otherwise, potato originates from America and its origins are very well documented. It came to Turkey from Croatia, hence its name. The Croatian name for potato is krumpir, but in some dialects, it is also called kumpir or kompir. Interestingly, there is no similar dish in Croatia.

Apart from America and the United Kingdom, a similar dish exists in other cuisines. In Brazilian cuisine it is called batata inglesa or literally translated English potato. In French cuisine it is pomme de terre au four. It is also popular in Russia, Armenia and Brazil.

We saw this Kumpir recipe at one street food stand in Istanbul, and we tried to make it ourselves. It’s essentially very simple and fast.

Kumpir looks really delicious with the toppings. It’s definitely worth trying. Thanks for the recipe.

yummy. What’s your twist? How do you make this popular recipe yours? I am curious to know your insights.

Wow, it seems so simple and delicious, particularly love the mix with the cheese!

I’ve never had Turkish food but this looks beyond delicious! I’ll definitely give it a try!

Omg! These look so freaking delicious. I’ve never heard of them before but the filling sounds realllllly good.

I’m British and we eat plenty of potatoes, but learnt things about potatoes that I never knew before! These look so good. I’ve eaten Kumpir in Turkey, it’s delicious. Thanks for this receipe.

This sounds really yummy. I’ve not tried this before. These are fillings I wouldn’t have thought to use on potatoes.

I am going to try this recipe. As much as my family loves potatoes, I am sure they will enjoy this new dish I will make for them. Thanks for the recipe!

It’s called a Jacket Potato in the UK, not Jacked!