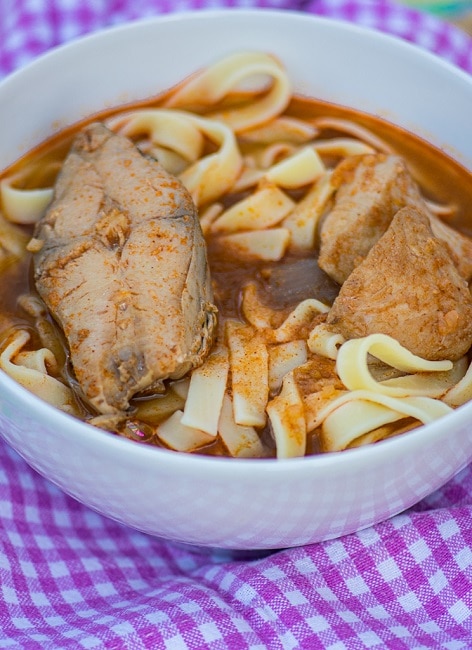 Fisherman Soup (Halászlé) is a spicy Hungarian traditional dish, made of river fish and seasoned with paprika.

Fisherman Soup (Halászlé) is a Hungarian traditional dish. It is a tasty and spicy soup made of river fish and seasoned with paprika. Recipe for fisherman soup is quite simple and awesomely easy to make.

Sometimes, in English translation, you can find it under the name Hungarian fish soup or fisherman stew.

How to Make Fisherman Soup

Since this is a traditional dish, there are countless different recipes. However, the main ingredients are always fish, paprika and onions. Depending on the region, some more spices are added, but these three ingredients are essential.

The trademark of this dish is carp, but other types of fish are also used, such as catfish, pike, perch. Since the Hungarians have no sea, they turned to river fish and became grandmasters for saving fish from rivers.

Another important ingredient is quality paprika, hot and normal. Therefore, it is common that fisherman soup is a bit spicy, and sometimes it can be very spicy. In case you did not know, paprika was invented in Hungary. You can read an interesting story about paprika in my post – The History of Pepper.

The third part important for an excellent Fisherman soup is onion, which should be as old and mature as possible.

The way this dish is cooked largely depends on the region. It is generally believed that there are 3 basic types of making this dish.

Where You Can Find It?

Fisherman soup is immensely popular especially in the southern parts of Hungary. Very often there you can find local competitions in cooking, which sometimes have hundreds of competitors.

Fisherman soup can also be found in other cuisines of neighbouring countries. Let’s just mention Fiš Paprikash in Croatia and Riblja Corba in Serbia.

I got this recipe for fisherman soup at one of the local competitions when I was a guest. Although not among the winners, I am thrilled with this recipe. I must admit it is one of my favourite dishes I recommend everybody to try.