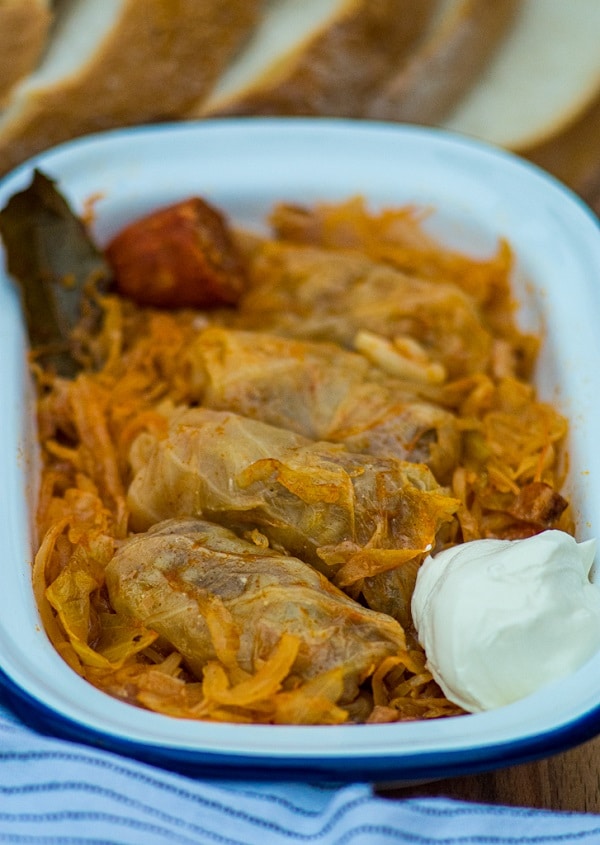 Toltott Kaposzta (Töltött Káposzta) is a traditional Hungarian dish. It is a hearty and healthy dish, which makes it very popular, especially in the winter months. Although cooked for a relatively long time, the recipe for Toltott Kaposzta is very simple.

It is made of cabbage leaves stuffed with a mixture of minced meat, rice, and spices. Usually, it is cooked and served with sauerkraut, smoked meat, and sour cream.

The name Toltott Kaposzta literally means stuffed cabbage. It comes from the word töltött which means filled and káposzta or cabbage. In the southern parts of Hungary, it can even be found under the name sarma.

This dish has deep roots in Hungarian cuisine. The predecessor of stuffed cabbage in Hungarian cuisine was cabbage meat. Along with the Ottoman conquests, Turkish dishes came to this area, including sarma. However, Turkish sarma is wrapped in vine leaves, but in this area, sauerkraut was very popular. It didn’t take long that a new variant of sarma emerges, this time wrapped in sauerkraut. Again under the influence of local cuisine, people added dried meat to the dish. And so, the Hungarian traditional dish had been created.

The first known records date from the late 17th century, in the book of the Szakáts craft.

As with other traditional dishes, there are countless variations. Almost always the base is minced pork, sauerkraut, rice and smoked meat. However, depending on the region, you can also find variants with a combination of beef and pork, spices such as caraway seeds, barley instead of rice. In the Szabolcs region, for example, tomato puree is a common ingredient.

Let’s mention that you can find similar dishes in the cuisines of Central Europe, Asia, the Levant, and even Brazil and Japan. Naturally, in each of these cuisines there are different variants, and sometimes even different names. Let’s just mention a few. In Bulgaria, Turkey, Serbia, Croatia, Bosnia & Herzegovina,  and Albania a similar dish is called sarma. In Romania and Moldova, it is called sarmale. Interestingly, in some states, they are known as little pigeons. This is the case with Russia [Golubtsy], Poland [Gołąbki], in Ukraine [Holubtsi] and the Czech Republic and Slovakia Holubky.

We got this Toltott Kaposzta recipe from a friend from Pecs, a city from in southern Hungaria. He is a foodie like me, and his family use this recipe for generations.