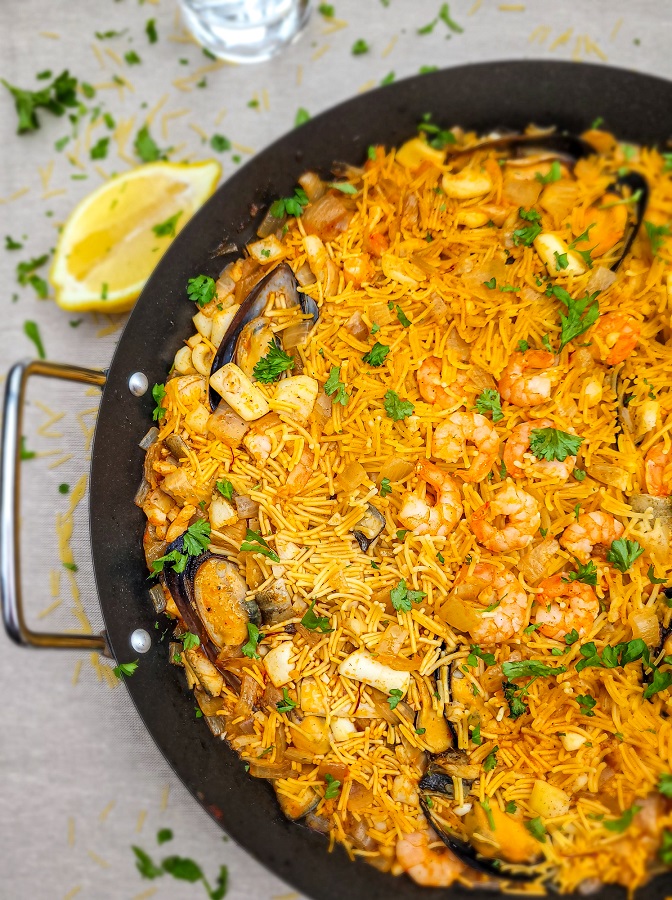 Fideua is an excellent dish which can be eaten any time of the day.

What comes to your mind when you heard the words, ‘Spanish cuisine?’ You probably think of paella and tomatoes. But there is a similar dish called fideua that you might crave after you taste it.

Fideua is a famous noodle and seafood dish which resembles paella but there are key differences between the two. Seasoned with lemon, the dish has several seafood ingredients including shellfish, squid, cuttlefish, or monkfish.

The Valencian dish takes forty minutes to cook and preparations take about twenty minutes. Valencia is known as the land of rice and that’s how they created different dishes made with this ingredient. Fideua is one of them.

Fideua recipe has some variants especially the way people season it. A stock is made from scratch and then the pasta is sauteed in the same. Usually, pasta gets boiled and is then added to the dish, but in this recipe, you are supposed to mix it with the broth and cook it.

Although Fideua is easier to make as compared to paella, but it still has a colorful look and mesmerizing fragrance. Skill competitions are held for chefs to judge how good their fideua is.

Fideua is an excellent dish which can be eaten any time of the day. You can devour it during lunch hours or grab a bowl and have a sumptuous dinner. A glass of vino blanco pairs really well with a bowl of Fideua.

The first difference between Fideua and Paella is that the former one is made with seafood. Paella can contain different kinds of meat too such as chorizo. Fideau is cooked in a fish broth and a variety of fishes are added to elevate the taste.

Paella is cooked with arroz (rice) and Fideua is cooked with pasta/noodle. You may feel that both the dishes are similar (mainly because of how they look and the overall preparation), but they have some key differences like I have mentioned here.

Paella is a very famous dish which also comes from Valencia. The purpose behind making paella was because farmers could gain access to the ingredients such as rabbit, rice, chicken, snails, etc. It is a wholesome meal. Once you order paella or make one at home, you do not need anything else as it is a satiating meal.

Fideua is all about the fish broth and the noodles. People use ali oli and lemon to elevate the taste of the dish.

What to serve with Fideua?

Fideua is a wonderful dish that can be devoured as it is. It is served in a bowl. The broth has a distinct and delicious flavor and fragrance. It will fill up your senses with warmth and happiness.

Just like you make paella, you must fry the noodles in the paella pan and then add it to the broth. You can use rockfish stock to cook the broth. Use mussels, squid, and shellfish to add a burst of delicious flavors to the fideua.

Fideua noodles are quite thin. They resemble vermicelli and are quite dry. Do not use regular noodles for this recipe. Once you gather the ingredients and make the perfect Fideua, you can serve it up hot and let your family enjoy the pescado flavor. Add a strand or two of saffron and that will give the dish a rich color.

Ideally you should serve it with lime and some aioli. Make fresh aioli at home using garlic, olive oil, and salt. This creamy sauce is quite flavorful and can be found in Spain, Italy, and France. The creaminess enhances the overall taste of the dish.

There is a legend behind the dish. As per the legend, the dish was invented by a chef of a Gadia fishing boat. His name was Gabriel Rodrigues Pastor. So, the boat’s skipped was fond of rice that he would usually finish all the ration. There was nothing left for other fishermen simply because the skipper would finish all the rice on the boat. The cook thought of a solution. Instead of using rice, he used noodles in the Fideua recipe. He thought this would displease the captain and he would never want to eat it again. However, the dish became popular and even the restaurants at the harbor started serving it.

Although both paella and fideua are cooked in paella pan but you must use noodles and fish broth for the latter dish. Nonetheless, both the dishes are flavorful. So if you are in the mood to eat noodles and something that includes pescado, you might as well want to try Fideua.