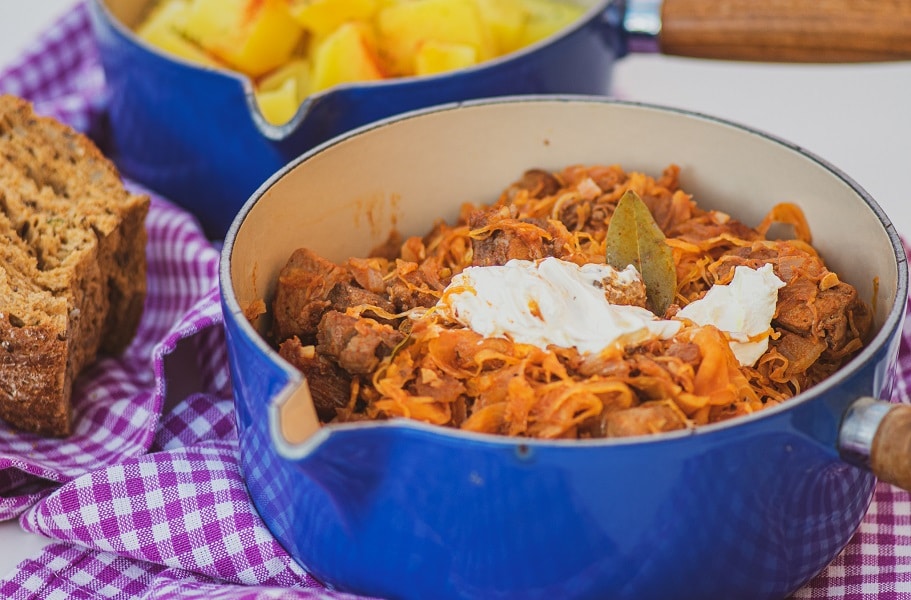 Szekely goulash is Hungarian pork and sauerkraut stew. This dish is a variety of goulash - the synonym for the Hungarian traditional cuisine.

Szekely goulash is Hungarian pork and sauerkraut stew. This dish is a variety of goulash – the synonym for the Hungarian traditional cuisine.

Traditionally, it is prepared in larger quantities because it can be heated, and with each heating, it is even better. I checked and it’s true.

However, the way it was created explains a lot. For this dish, even place and time when it was created is known. It happened in 1846 at the Komlo Garden restaurant in present-day Budapest.

According to legend, the origin of this dish and its name are attributed to József Székely. He was a 19th Century county archivist, poet and writer. According to legend, Székely came to the restaurant with his friend, the famous Hungarian poet Sándor Petőfi. But they came for a late lunch when the food ran out and the only thing the waiter could offer was the remains of sauerkraut and pork stew. The witty Székely mixed it into one dish, and that’s how Székely goulash came into being. According to another legend, everything happened about the same, but at another restaurant – Golden Eagle.

Thanks to Petőfi’s fame, but also to excellent taste, it became popular. Very quickly many Budapest restaurants had this dish on the menu. Initially, this dish was also known as Szekler Cabbage. It was first mentioned under this name in the True Hungarian Cookbook from 1899.

According to another interpretation, the name originates from Székely Land, more specifically the area in central Romania. This area is mostly populated by Hungarians, and they are called the Székely, or “Seklers”.

There is also an almost identical dish in Slovakia called Szegedinský guláš. The name refers to the town of Szeged in southern Hungary, known for growing red peppers.

Székely goulash is best served with bread and cream fraiche, and with it goes great with glass (or two) of red wine.

I got this recipe for Szekely goulash a few years ago when I visited Pécs in southern Hungary.

Paprika is missing in the ingredients. How much is used?