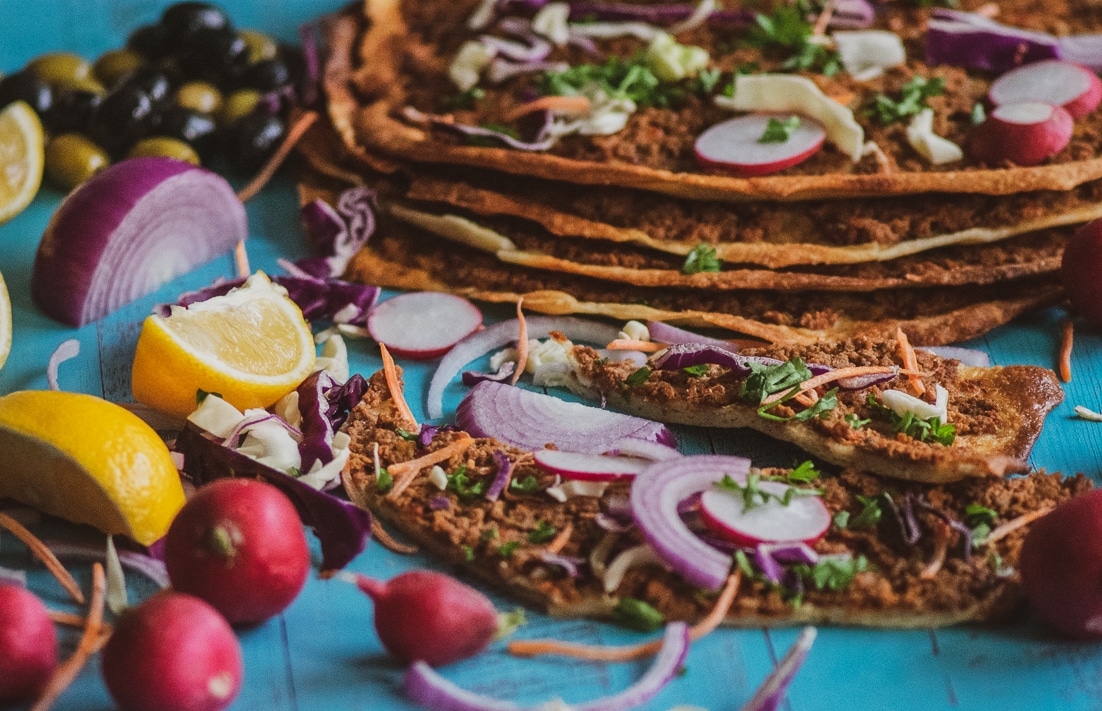 Lahmacun is a traditional Turkish dish, which can be found anywhere in Turkey. It's basically flatbread and meat topping, garnished with spices and herbs.

Lahmacun is a traditional Turkish dish, which can be found anywhere in Turkey. It’s basically flatbread and meat topping, garnished with spices and herbs.

Although toppings vary, minced lamb or beef are used most often, along with vegetables like onions, tomatoes, aubergine, peppers, lettuce, and even garlic and pickles. The most common spices are paprika, cinnamon, cumin and black pepper.

Due to the appearance, ingredients and the way of preparation, sometimes it is called Turkish, Armenian or Lebanese pizza. Of course, it is nothing but banalization and over-simplification. In addition, unlike pizza where cheese is an integral part, lahmacun is made without cheese.

However, there is a common origin of pizza and lahmacun. Flatbread or oven-baked bread with different stuffing existed and still exist in numerous traditional cuisines across the world. In Italy it is focaccia, in Greece pie, in the Balkans it is called pogaca, while in Catalonia is coca. Similar types of flatbreads exist outside Europe. Therefore, in Lebanon, we can find Manakish, and in China bing. The most famous one, is the naan, which can be found in Central and Southeast Asia, the Indian subcontinent and even in the Caribbean.

According to historical records, in 6th century BC soldiers of the Persian king Darius I baked flatbreads on their shields with a topping made of cheese and dates. In fact, the origin of the lahmacun should be traced here.

The etymological Lahmacun comes from the Arabic word laḥm bi-ʿajīn, which means “meat with dough”.

Lahmacun is also popular in other cuisines, so it is widespread in Israel, Lebanon, Syria and Armenia.

This dish has even been the subject of dispute between Turkey and Armenia. A few years ago two restaurants were opened in Russia, where lamadjo as lahmacun called Armenians is branded as Armenian national dish. This has led to fierce reactions in Turkey and even protests indegenerique.be.

Today, this dish has reached global recognition and can be found in many Turkish restaurants around the world.

I’m very selective when it comes to pizza but this seems like it’ll be tasty. Trying it wouldn’t be a bad idea. Thanks for the recipe.