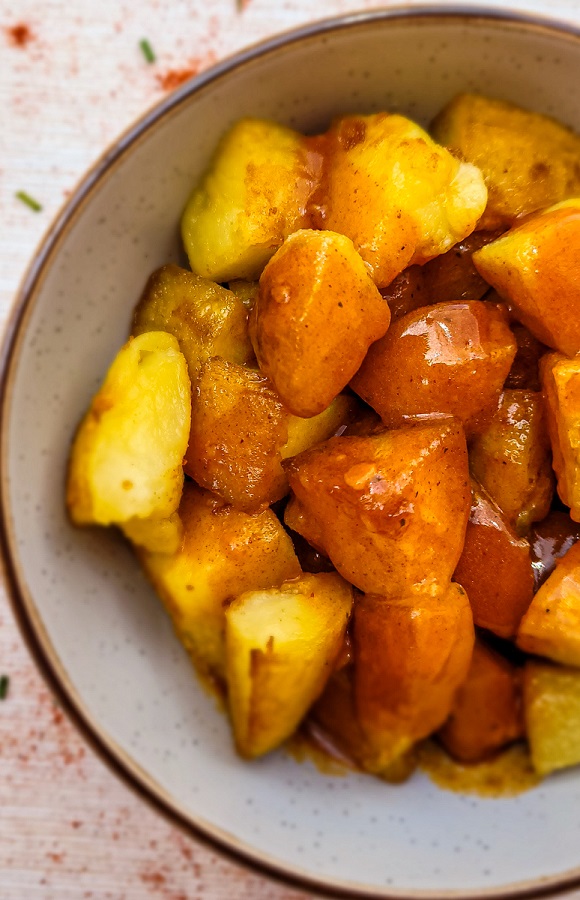 Patatas Bravas is a simple delicacy prepared using readily available ingredients and can be made in different variations.

Patatas Bravas, also known as spicy potatoes, is an incredible dish in Spanish most popular tapas. It’s a plate of deep-fried potatoes topped with a spicy sauce.

The authentic patatas bravas recipe consists of white potatoes chopped into wide cubes. The potatoes are fried in oil and served warm with a delicious sauce. The dish is a go-to choice with a snack or an appetizer. The recipe has grown in popularity to become a crowd-pleaser in many regions other than Spain.

It is an incredible dish. You’ll always tell the quality of a place or restaurant by the eminence of its Patatas Bravas. It is a simple delicacy prepared using readily available ingredients and can be made in different variations.

The key to making it lies in the preparation of the ingredients. Different people have different ways of doing the meal. You may notice trivial variations in the shape of the potatoes. The sauce also comes in varying tastes and flavours.

How to make Patatas Bravas Crispy

Two main ingredients encompass Spanish patatas bravas. One is white potatoes, and the other one is the sauce. The potatoes are chopped into wide chunks and deep-fried in olive oil. However, as with different varieties of potatoes such as “fries,” the only thing that sets patatas bravas aside is the shape.

How it is served, the sauce is directly dripped onto the fried potatoes. In this respect, Bravas sauce is slightly spicy and bright red. Some would say that the spicy sauce explains its name because “brava” roughly translates to “strong.”

If you’re a true fanatic of spice, you may end up finding the sauce not spicy at all. However, the level of flavor kick may significantly vary when you visit different restaurants or regions.

Preferably, many people love to accompany it Alioli, which is a mayonnaise that provides an excellent contrast to the dish. The two sauces may be dripped atop the fried potatoes.

If you’re vegetarian, it is suitably comforting when you eat fried potatoes in a sharp and spicy sauce. In your experience, you should order a portion of Patatas Bravas because it is purely vegan.

Fried potatoes, along with onions, garlic, and a spicy sauce, make it a perfect vegan. Usually, the dish is a pantry-friendly vegan you’ll love to have for any other day.

Madrid, Spain, claims a signature on Patatas Bravas, which is never missing on the menu at any known tapas. The dish dates back to 1542 after Spain concurred with the Inca Empire to bring back their agricultural produce, such as tomatoes. The people of Madrid, Spain, started preparing bite-sized fried potatoes dressed with served with spicy tomato sauce.

Apart from Spain, this is also a familiar dish in other regions. The meal is commonly known as Papas Arrugadas in the cuisines of the Canary Islands. Americans are also known for their unshaken love for Patatas Bravas, commonly known as French fries. In France, it is widely known as frites.

I learned about the patatas bravas recipe, among a host of other Spanish specials from a friend of mine who worked in Barcelona. He used to say that you can always tell the quality of a place depending on the way it is prepared. For him, this is one of his favorite meals. He told me that he had been using the meal for a couple of years now.