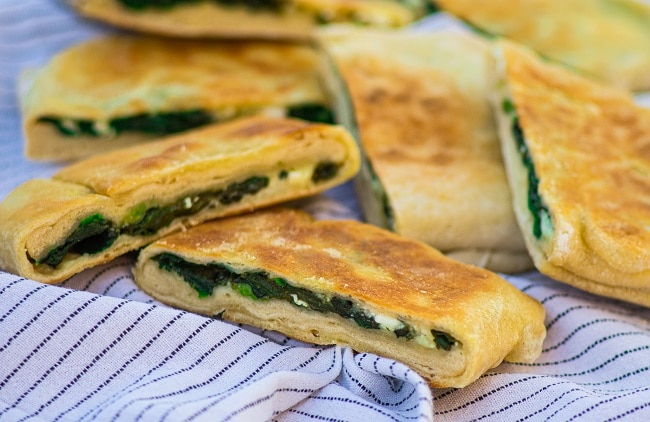 Gozleme (Gözleme) is easiest to describe as a favourite Turkish snack. Recipe for Gozleme is quite simple and easy to make.

Gozleme (Gözleme) is easiest to describe as a favourite Turkish snack. It is a simple and tasty flatbread usually made of unleavened dough filled with different stuffing. Recipe for Gozleme is quite simple and easy to make.

Traditionally, the dough is rolled out in front of you, filled and baked on a griddle. Due to the way it is prepared and the appearance, tourists often call it Turkish pancake.

Gozleme can most often be found stuffed with cheese (Peynirli), spinach (Ispanaklı), potato (patatesli). There is much other stuffing, which mostly depends on the region, but on personal preferences as well. Recently, thanks to tourism, you can find “contemporary” versions filled with chocolate spreads, fruit jams, honey. There are numerous variations.

Until recently, Gozleme was considered a rural food. However, thanks to popular culture and tourism, there has been an explosion of interest in this dish. Today it can be found literally on every corner in Turkey. I dare say that in almost every market there are stands with it. Also, there are more and more restaurants and hotels which have it on standard offer. I was especially interested in the roadside stands where you can stop and buy fresh Gozleme.

Gozleme comes from the Turkish word Göz, which means eye. Namely, brown spots are formed during baking, hence the name. As with other traditional dishes, there are no detailed historical records of the origin of this dish. However, it is assumed that, like I borek, it is present in Turkish cuisine for more than a thousand years. In fact, Gozleme can often be found under the name saç böreği.

Traditionally Gozleme was served as breakfast, but in the last few decades, it has evolved into a snack. Today it is a popular street-food. It is usually served sliced into pieces or as a single piece in a square shape. With it goes excellent turşu, which is a Turkish name for different kinds of pickled vegetables.

I tried it first, during my visit to Istanbul when an older woman prepared it in front of me. I got this Gozleme recipe from her, and the method of preparation as well.