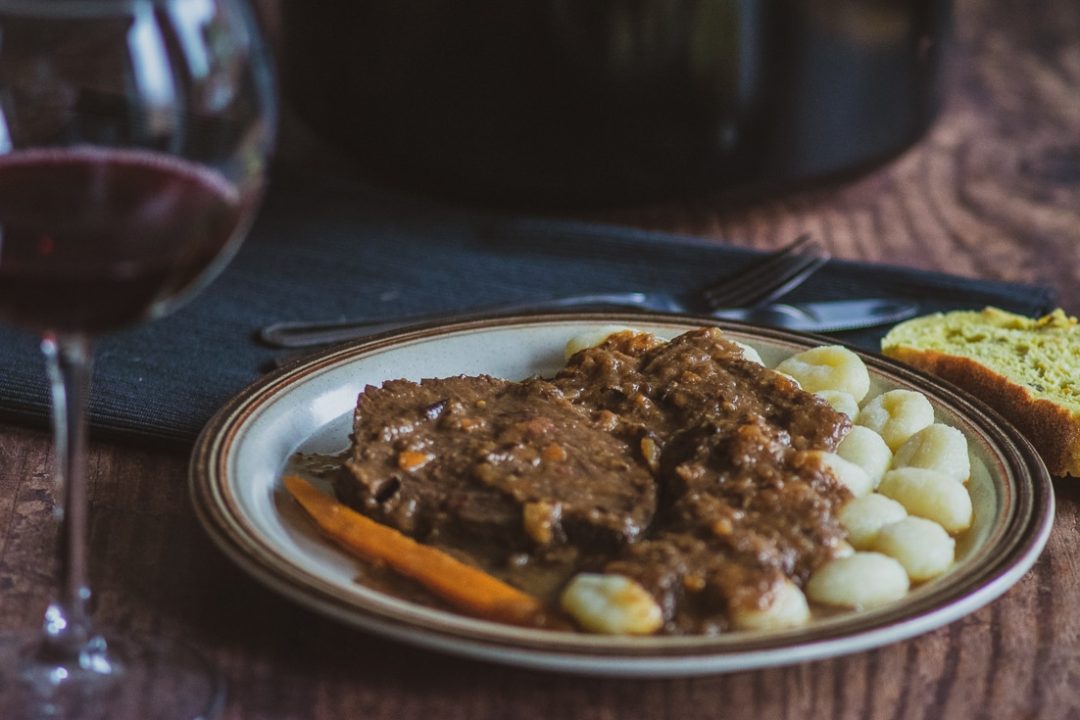 Pašticada is a traditional dish of the Croatian coast. Some as a term of endearment call it the queen of Dalmatian cuisine.

Pašticada or as it is known as Dalmatian pašticada is a traditional dish of the Croatian coast. Actually, it is a beef round cooked in vegetables and wine and/or prošek (sweet wine).

Traditionally it was made from pieces of cattle leg, but today is completely replaced by beef round.

As pašticada is so widespread in Dalmatia and Istria, almost every home has its own version of the recipe. One of the most common misunderstandings is whether red wine is used or prošek (very sweet dessert wine from Dalmatia). My answer to this eternal doubt is – I use both. Although the traditional way of preparing is still ubiquitous, there is a lot of experimentation with ingredients these days. So today it is possible to find chicken, rabbit, fish and even vegetarian pašticada.

Similar dishes can be found in Italian and Greek cuisine. Namely, the traditional delicacy of Verona is pastissada de caval, or horse meat stew. There is also pastissada de manzo in Venice, very similar to the one in Dalmatia.

Pasitsada can also be found in Greek cuisine, especially on Corfu Island. Interestingly, spaghetti is served there as the side dish.

There is no clear written evidence as to where pašticada originated. The historical assumption is that passtisasda de caval originated first. Venice took this recipe and during the expansion of Venetian Republic, it brought the dish to the regions under their rule.

When Napoleon abolished the Venetian Republic, pašticada remained and became the most famous delicacy in Dalmatia. Some as a term of endearment call it the queen of Dalmatian cuisine.

Historically, and this custom is kept up to date, it is served on special occasions such as weddings, births, baptisms and other festive occasions.

The secret of a good pašticada is a balance of the four flavours: salty, sweet, sour and bitter.

It is usually served with gnocchi, and sometimes with wide pasta. It goes great with red wine.

Oh my goodness this is so delicious