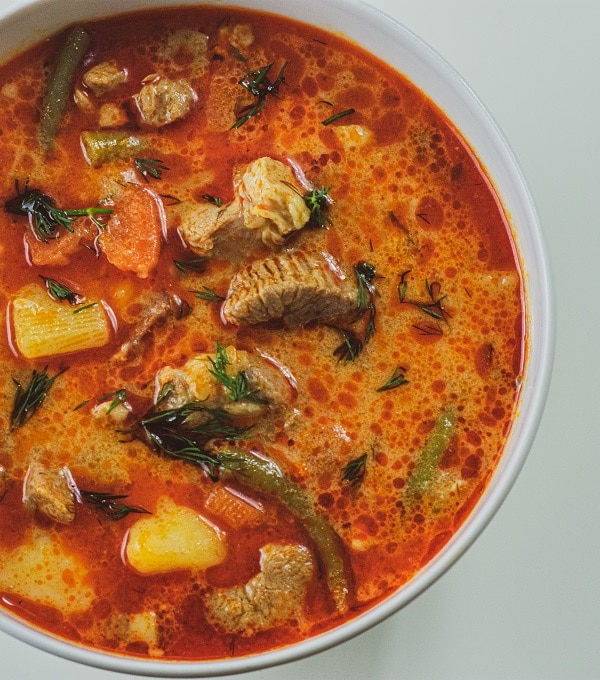 Paloc Soup is a lighter and a bit sour version of goulash, with the addition of green beans, dill, and sour cream.

Paloc Soup (Palócleves) is considered a recognizable part of traditional Hungarian gastronomy today. However, it was created not so long ago in the 1940s. In the meantime, it was even forgotten for a few decades before gaining popularity again.

Paloc Soup recipe is a lighter and a bit sour version of goulash. With the addition of green beans, dill, and sour cream.

The name of the soup leads to a wrong conclusion because it has nothing to do with the Palóc ethnic group. At least, not directly. The Palóc are a subgroup of Hungarians in Northern Hungary and southern Slovakia.

There are several versions of how this soup was invented (came to be). The first and most widespread says that it is the work of Janos Gundel. He was one of the most famous Hungarian chefs and founders of the gastronomic dynasty Gundel. In his restaurant in Budapest gathered the most famous artists of that time, István Tisza, Ferenc Liszt, Mór Jókai, Kálmán Mikszáth and many others. In honour of Mikszáth, the famous writer of the time, Gundel named the soup after his nickname, “the greatest of Palóc people”.

Another legend says that Kálmán Mikszáth asked Gundel to create a new dish that contains all the features of traditional Hungarian cuisine.

Meanwhile, the recipe for this soup was forgotten. It appeared a few decades later in Magyar Elek’s the Gourmet Master’s Cookbook. Here appears the third story of how this dish came to be. Namely, according to Elek, Paloc soup was made for a gastronomic competition. Accordingly, it was so good that the jury asked to have another plate.

Today, there are many versions of Paloc soup that differ in what meat is used, how vegetables are cooked and how they are thickened. Usually, this dish is made from lamb or beef, sometimes from pork, and there are even versions with turkey. Older versions of recipes state that meat and vegetables must be cooked separately. Adding the sour cream is varies as well from recipe to recipe.  You can find recipes where sour cream is not added to the dish but is served separately, as a side dish.

The recipe for Palóc Soup, like many others, I got from my good friend Imre. I must not forget to mention, he is a foodie like me, and a great connoisseur of traditional Hungarian cuisine.