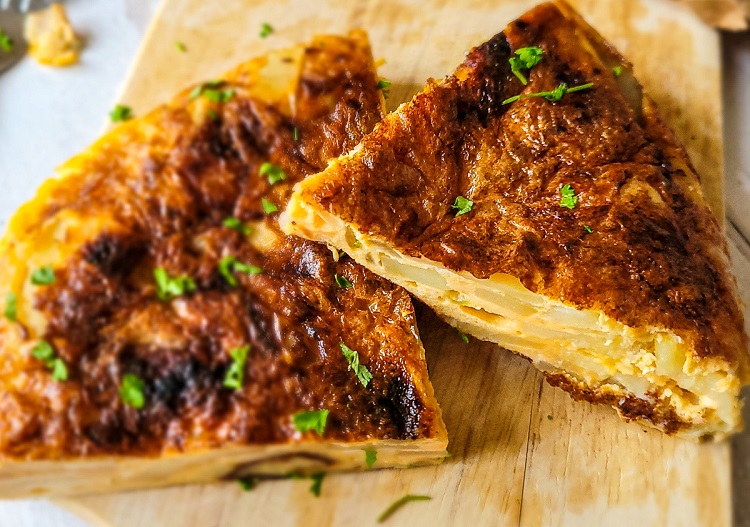 Tortilla Espanola is one of Spain’s most popular and served tapas delicacies. The Spanish omelette is prepared with potatoes and eggs cooked in olive oil.

What is Spanish Tortilla Espanola?

Tortilla Espanola is one of Spain’s most popular and served tapas delicacies. The Spanish omelette is prepared with potatoes and eggs cooked in olive oil. Onions can optionally be included in the ingredients.

The Tortilla Espanola recipe is a perfect mishmash of exceptional ingredients. The secret to making it delicious and burst with satisfying flavour is to use extra virgin olive oil and fresh eggs. Olive oil is used in cooking the potatoes and adds a rich flavour to the end tapas.

It can be an excellent mouth-watering delicacy for a mid-morning snack. The dish can also serve as a light dish in the late evening. It can best be described as something between the main course meal and an appetizer.

What do you Serve with Tortilla Espanola?

Tortilla Espanola is often served as a mid-morning snack. Spaniards like to enjoy it with a steaming cup of coffee. However, sometimes you will find it served as the main course. In such a case, it’s served with a combination of fresh crusty bread, sofrito, and a simple salad. For the best taste, we recommend Yukon potatoes.

Tortilla Espanola recipe traces its origin back to the 19th century when a Spanish Army General visited a local home after the First Carlist War. He was served a meal by a poor Navarre housewife. All that the poor lady had in stock were eggs, potatoes, and onions. It started to take root among the locals until it became a signature dish.

Since then, the popularity of the recipe grew across the borders to the neighboring regions and countries. The delicacy is found in many other different variants. It is common in Iran, referred to as Kookoo Sabzi, Italy known as Frittata, and France, called Omelette.

Can you make Tortilla Espanola in Advance?

Tortilla Espanola can stay refrigerated without losing its flavour; therefore, it can be prepared for later consumption. Also, you can eat the dish while cold. Preparing the dish ahead of time is a great idea to save time, especially if planning a special tapas fiesta with friends or family. Some would say that you can turn Tortilla Espanola into an element for sandwiches or Bocadillos. Here, you place a slice of the omelette between two pieces of baguette. You can try this method and be assured that you will never forget the experience.

A Tortilla Espanola that is prepared ahead of time tastes even more fabulous. You can try this by broiling it as opposed to attempting to flip it. Especially when you live in Spain, you will find yourself eating it many times a week. It is a reliable recipe with a mix of ingredients that meet your preferred tastes.