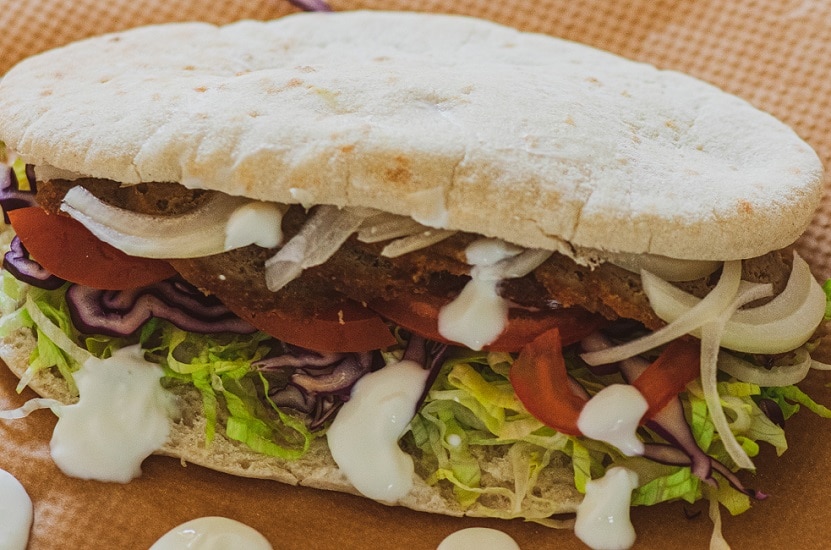 Doner Kebab or Döner Kebap, without a doubt, is one of the trademarks of Turkish cuisine. Its fame has long ago crossed the borders of Turkey and today is one of the most popular street food in the world.

Doner Kebab or Döner Kebap, without a doubt, is one of the trademarks of Turkish cuisine. Its fame has long ago crossed the borders of Turkey and today is one of the most popular street food in the world. Maybe the best evidence is a fact that it is popular even in Vietnam and Japan. Doner Kebab recipe consists of beef or lamb meat seasoned with spices and herbs, baked on a vertical spit-roast.

It is assumed that the doner kebab was first made in the middle of the 19th century. Until then, meat was usually prepared on a horizontal rotisserie. According to legend, the credit for this invention is attributed to Iskender Efendi. He suggested to his father to try this invention in the family restaurant in Bursa. Very quickly it proved to be a complete success and this is where the world story of doner kebab begins. Iskender Efendi in culinary history is also known for invention of extremely popular Iskender Kebab.

Based on it, similar dishes were formed in other cuisines around the world. For example, gyros in Greece, Shawarma in the Middle East and Al Pastor in Mexico.

Today, it is one of the most popular street foods in Turkey. You can find it served in many ways. However, some are more common, such as Iskender kebab, durum (wrap), Porsiyon (plate portion with grilled peppers).

In the 1960s, it began “conquest of Europe”. Namely, then Turkish workers migrate to Europe, and they brought doner kebabs with them. Thanks to this it is super popular street food in Europe. This is especially the case in Germany. It is even believed, completely incorrectly though, that it was invented there. However, the truth is that takeaway doner kebab wasn’t invented in Germany, more precisely in Berlin.

The credit for that goes to Kadir Nurman, who had his shop at the famous Berlin Zoo Station. The rest is history. It is estimated that around 2 million doners are sold per day in Germany, and this industry is worth over 4 billion Euros annually. There are more than 4,000 doner kebab shops in Berlin alone, even more than in Istambul.

Apart from Germany, doner kebab is popular in France, the Netherlands, Scandinavia, Austria, but also in the USA, Canada, all the way to Australia, Vietnam and Japan. Of course, in each of these countries, it is served in a slightly different way, with a local twist.

This doner kebab recipe is homemade, and I got it from my friend Stefan, a local food guide, from Berlin. As he explained to me, the recipe for doner kebab is like street food and does not require vertical roasting.

Love doner kebabs! We went to a place in London last year that does amazing doner kebabs (in Camden). So good!