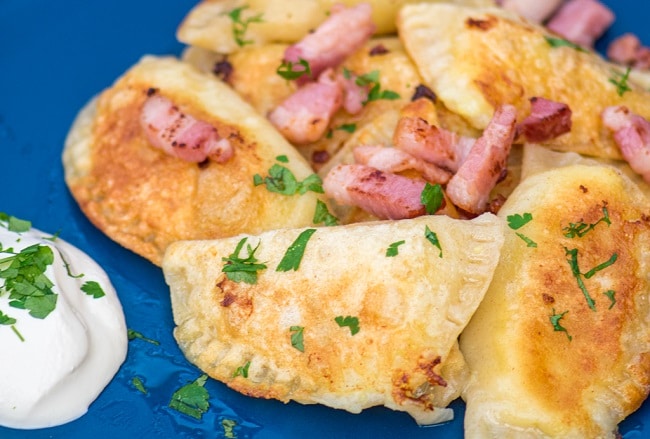 Polish pierogi are homemade, half-moon-shaped dumplings that are stuffed with ingredients such as mashed potatoes, meats, cheese, and sauerkraut.

What Does Pierogi Mean?

Polish pierogi, also spelt as perogi, are homemade, half-moon-shaped dumplings that are stuffed with ingredients such as mashed potatoes, meats, cheese, and sauerkraut. The word has Proto-Slavic roots, and when translated means “pie”. It is also used as a generic term for dumplings.

There are many theories as to how it arrived in Poland in the 13th century. One is that Marco Polo brought it with him from China.

Another version is that Saint Hyacinth of Poland, the patron saint of drowning, instructed the villagers of Koscielec to pray for protection during the storm, which had destroyed all of their crops. When the storm cleared the next day, the crops miraculously regrew. The people thanked Saint Hyacinth for preparing pierogi using those crops.

Traditionally, it is served in Polish households during holidays like Easter and Christmas Eve. Because Polish families observed fasting on Christmas Eve, the traditional version was meatless and dairy-free. In the summer, a sweeter version was made with fruits and berries. On special occasions such as weddings, it would be filled with chicken meat. They’re kind of like Empanadas from Colombia or Ravioli from Italy!

No one knows the true history of pierogi, but one thing is for sure — people love its taste. However, the recipe has ventured outside of Poland and has become popular in p British Columbia, Ireland, and Germany.

The recipe involves many steps, but don’t let that discourage you! You’ll be glad that you made your own instead of buying one from the supermarket. The good news is that there’s no single way to make pierogi, so you can use as many (or as few) ingredients as you want.

The taste largely depends on its filling — whether you want to follow the traditional pierogi recipe of potatoes and cheese, or you want to get creative by cooking sweet blueberry pierogi, the filling is entirely up to you. However, for this guide, I’ll teach you how to make authentic pierogi that traditional Polish grandmothers would make.

Authentic pierogi were garnished with fried onions, pork rinds, and lardons, but these toppings may be traded for sauces and fresh herbs such as chives, thyme, rosemary, or basil. The most traditional way to enjoy a serving is with a topping of caramelized onions and bacon.

Pierogi recipe has even made its way into my kitchen! I’ve found that it is best served as finger food at parties – they’re so delectable and bite-sized, I can’t stop popping them into my mouth!