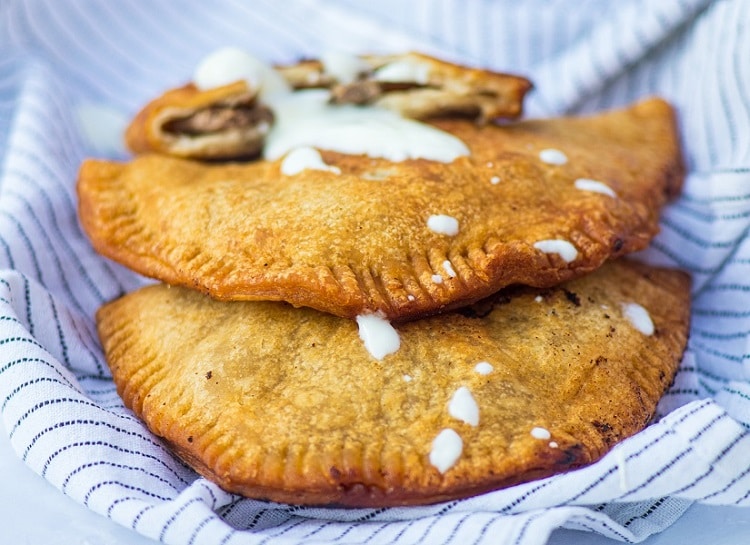 Recipe for borek is very simple. It is a baked savoury pie made from filo dough, filled with various stuffing.

What Does Borek Mean?

Borek or Börek is one of the most widespread dishes of traditional Turkish cuisine. Recipe for borek is very simple. It is a baked savoury pie made from filo dough ( Turkish: yufka), filled with various stuffing.

It is deeply rooted in Turkish cuisine and there are many shapes, fillings, and variations. The most common are Su böreği or ‘water börek’, Sigara böreği ‘cigarette börek’, Kol böreği ‘arm börek’, Gül böreği ‘rose börek’, Sarıyer böreği named after a district of Istanbul, Saray böreği ‘palace börek’.

Also, fillings are very different. Cheese and parsley stuffing is perhaps the most common. However, you can also find it with minced meat or sausage, spinach, nettle, leek, courgette, etc.

The origin of borek cannot be clearly established, but the word börek comes from the Turkish language. The root is in the verb bur which means twist. Later, it became synonymous with dishes made of yufka.

It is commonly believed to have originated in the cuisine of Turkish tribes 7 centuries ago, even before they came to today’s area. Another theory is that borek, like baklava, originates from Byzantium, where there was a dish called tyritas plakountas or “cheesy placenta. Tyritas plakountas” is a Byzantine version of the Ancient Roman placenta – baked layered dough and cheese dish. This dish was excellently documented by Cato in his epochal work De Agri Cultura. In Romania,  is still called “plăcintă”.

In their conquests, it was also discovered by the Mongols. At the beginning of the 14th century, Yinshan Zhengyao (‘Dietary Principles’) was created in Mongol-ruled China. This was a kind of cookbook, describing three ways of preparing this amazing dish.

Regardless of its origin, borek became a favourite dish in the Ottoman Empire. To the extent that it was regularly at the table of the Sultan and his government. But it was also a dish of the “ordinary” people. During the 16th century in Istanbul, there were 4 times more borek shops them bakeries.

As the empire expanded, it brought, among other things, borek to the conquered lands. Thanks to this, today it is an integral part of the cuisines once Ottoman-ruled countries. This is especially the case in the Balkans and North Africa. In Greece and Bosnia and Herzegovina and Serbia borek is sometimes even called pie (pita).

In the countries of the former Yugoslavia, borek, or as it is called burek, is a staple food that is eaten at any time of the day. It is usually made of meat, and there are also versions of spinach, cheese and potatoes. Lonely Planet has included Bosnian burek in their book “The World’s Best Street Food”

It is even present in Jewish and Italian cuisine. The Ottoman Empire was a religiously tolerant state in which the Spanish Jews persecuted by Christian kings took refuge. They accepted the borek and enriched it with Spanish heritage. Thus it became part of the Jewish kitchen. In the late 18th century, Jewish people were forced to emigrate. They found the shelter in Venice, Modena and Ferrara. Of course, they also brought borek with them. Eventually, it became domesticated in Italy under the name burriche.

What to Serve Borek with?

I first tried this borek recipe a few years ago when I was visiting Turkey. I remember they served it with yoghurt. This combination was unforgettable delicious, that I immediately asked the local guide a recipe for borek.