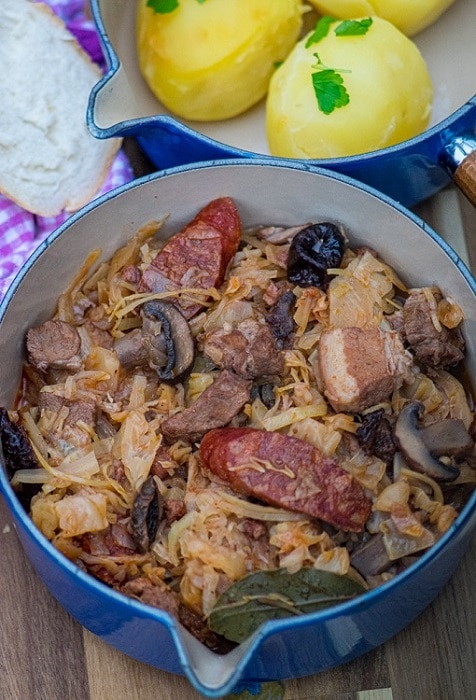 Bigos or Hunter Stew is a hearty stew made of a different kind of chopped meat with sauerkraut and shredded cabbage.

What is Bigos Stew?

Bigos (Bigosz) or Hunter Stew is the Polish national dish and one of the trademarks of Polish cuisine. It is a hearty stew made of a different kind of chopped meat, sauerkraut, and shredded cabbage. Usually, it is enriched with a wide range of vegetables and spices. But the best part is bigos recipe is quite simple and easy to make.

Usually, it is prepared during the winter months or on festive occasions such as Christmas or Easter.

Bigos Origin (From Which Country is Bigos?)

This dish has a several centuries-long history in Polish cuisine. The first written mention dates from 1682 in Stanisław Czerniecki’s Compendium Ferculorum. There you can find an entire range of bigos recipes, but interestingly there is no mention of sauerkraut. Actually, Polish bigos was a dish of the nobility in its beginnings. It is believed that it originated in noble manor houses from the remains of large feasts. After the feast, it was customary to go hunting, and stew of leftovers, spiced with exotic spices was convenient. Hence the name hunter stew.

In addition to Czerniecki’s cookbook, there are other books with bigos recipes.  There you can find spices such as onions, wine vinegar, lemon juice, raisins, cinnamon, cumin, nutmeg, cloves and many others.

Bigos as we know it today originated in the 18th century. Due to the greater availability of meat, the popularity of this dish has spread among the wider mass of society. However, due to the lack of spices, they were replaced with sauerkraut. This is how “rascal’s bigos” was created –  more sauerkraut and less meat.

Since it is hearty, and for the standards of that age a very healthy dish, its popularity quickly spread beyond the borders of Poland. Let us mention that Henryk Babiński French chef and writer in his book Gastronomie Pratique mentioned bigos.

Also, this dish can be found in Belarusian (bihas) and Lithuanian (bigusas) cuisines. Similar dishes can be found in other cuisines. Let’s mention Podvarak in Serbia, Choucroute Garnie in France, Cassoeula in Italy, Szekely goulash in Hungary and Kapuska in Turkey.

Since it is a traditional dish, there are countless variations of bigos recipes. However, the basic ingredients are always meat and sauerkraut. Pork is most often used as meat, but you can also find it from beef, veal, chicken, duck, goose, and game. To the basic ingredients are added spices (allspice, juniper berries and bay leaves), onions, mushrooms, plums, and wine.

In the Greater Poland region, tomato paste and garlic are usually added to bigos. On the other side, in the region of Silesia small dumplings called kopytka, made of dough and mashed potatoes, are common. In some regions, in addition to white, red cabbage is used as well.

This dish is very popular refrigerated and reheated. It is believed that this way it only gets tastier.

Bigos also found its place in Polish culture. It is mentioned in the works of many Polish writers. Perhaps the most famous work is Mickiewicz’s Polish national epic Pan Tadeusz.

Usually, it is served with crust bread, as a starter before soup. It is not unusual to find it as a main dish with mashed potatoes or as a side dish.

Today you can find it on the menus of many traditional food restaurants across Poland.

I got this recipe for bigos a few years ago when I was in Poland. There I tried bigos and got a recipe from a chef who has been making it like this for several decades.