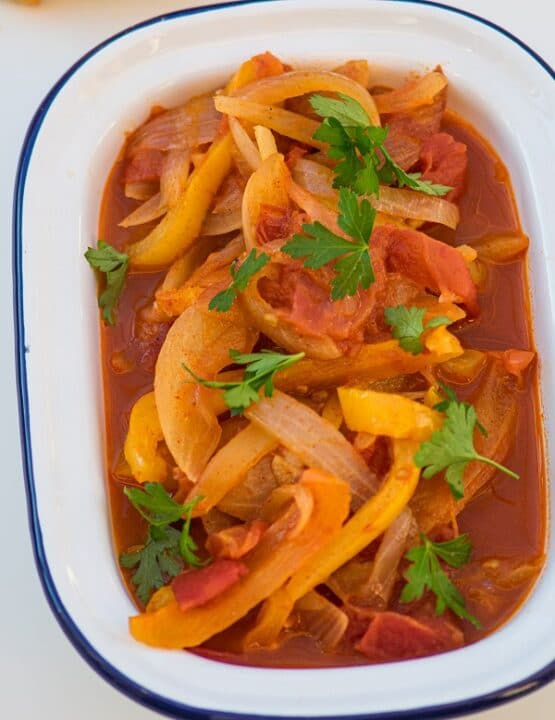 Lecso is one of the trademarks of traditional Hungarian cuisine.

What is the Hungarian Lecso?

Lecso is one of the trademarks of traditional Hungarian cuisine. It is a stew made of pepper, tomato, onion and paprika.

The authentic lecso recipe contains lard or bacon fat. However, as with other traditional dishes, it is also made with oil, so it is suitable for vegans and vegetarians.

Lecso is a very specific dish, and it is not easy to define it. We could describe it as something between a stew, side dish and appetizer.

Apparently, the origin dates to the 17th or 18th-century countryside villages. The ingredients, people could grow in the garden and make from them fast, cheap and healthy meal.

Some would say that it is a Hungarian version of ratatouille. Similar to lecso, ratatouille can be served for breakfast, lunch or dinner. It can be the main course, side dish or appetizer. However, the main difference is that ratatouille is a somewhat richer dish, with a French twist. Unlike lecso, it includes courgettes and aubergines as well as herbs characteristic for French cuisine (herbs de Provance). Also, the recipe for lecso is unthinkable without paprika, while it is not common in ratatouille.

What Do You Serve with Lesco?

It is most often served for lunch or dinner as a side dish, with a pork chop or roasted chicken. However, very often you will find it served as the main course. In this case, it is quite common in a combination with sausages.  In addition to sausages, often you can find steamed rice or potatoes, or both.

It also goes well with eggs, so you can often find it served for breakfast, with fried or scrambled eggs. This is especially common in Hungarian hotels and restaurants.

Traditionally lecso is made in summer and autumn when peppers and tomatoes ripen. However, today it is common to make throughout the year.

The popularity of lecso has crossed the borders of Hungary. It is well known in the cuisines of neighbouring countries. It is common in Romania  (ghiveci călugăresc),  Czech and Slovakia (lecho), Germany and Austria (letscho) Poland (leczo) and Russian (lecho). In Serbian and Croatian cuisine it is called lešo.

Also, other Mediterranean cuisines have similar dishes. Let us mention peperonata in Italy, pisto and samfaina in Spain, tourloú in Greece, türlü in Turkish and zaalouk in Morocco. However, unlike in Central Europe, these stews contain both eggplant and zucchini.