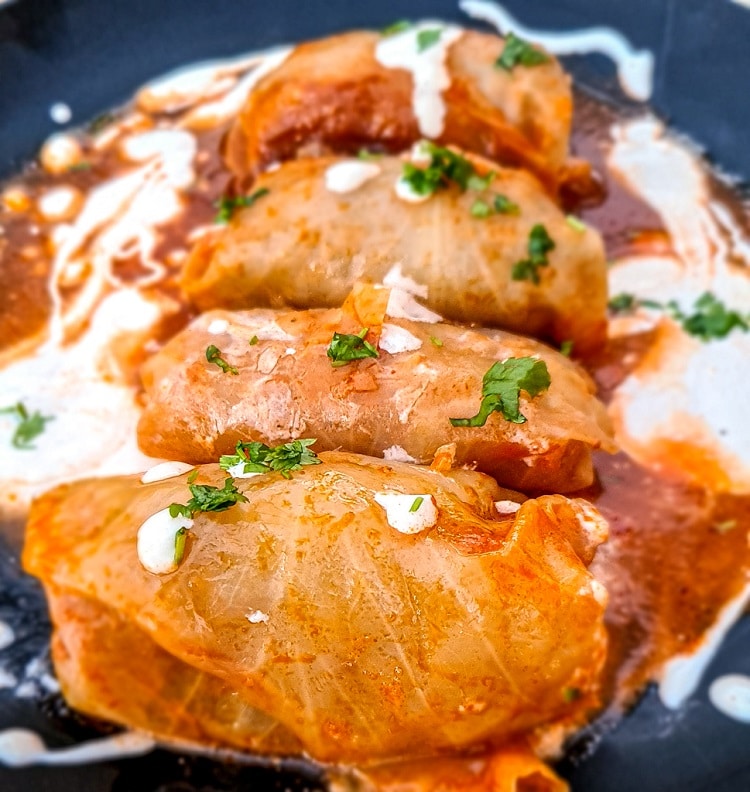 Golabki is a traditional Polish dish composed of a mixture of slowly cooked minced meat, rice, onions, and spices rolled in cabbage leaves.

The term ‘golabki’ (ga-womp-kee) is a Polish homonym. As you already know, it’s a delicacy. But it’s also a type of bird. Sounds confusing? It confuses some Poles as well, especially those who wonder where the name came from.

If you’re a Polish cuisine buff, you’ve probably realized that golabki (singular golabek) never misses on the list whenever pierogi, schabowy and barszcz are mentioned. Simply put, golabek is the master of Polish delicacies.

Golabki is composed of a mixture of slowly cooked minced meat, rice, onions, and spices rolled in cabbage leaves to create a sumptuous delicacy cherished by the Poles. The meat is majorly based on personal preference; beef, pork, or a mixture of both can be used. The cabbage also can be of any type. What gives it that unique, satisfying taste is the slow cooking process.

How to serve Golabki?

Golabki recipe isn’t that strict. Depending on the people’s culture and seasons, the recipe can vary. For instance, during winter, people will enjoy golabki served on mashed potato covered with rich tomato sauce. In spring, young fresh vegetables and herbs such as dill are also included in the recipe.

In short, every family has its way of preparing this delicacy, and therefore it’s okay to conclude that nobody’s golabki are perfect than others. It’s entirely dependent on personal preferences.

Golabki recipe is initially believed to have come from Ukraine. Ukrainians were known for having sophisticated delicacies served during parties and feasts known as ‘holubci’.  These feasts comprised of dishes containing doves stuffed with special items then rolled with cabbage leaves. The Poles then adopted this idea of wrapping stuff in cabbage leaves; holubci was then translated and adopted by the peasants.

These people then replaced the dove with a much cheaper version of meat (minced meat) and added rice (the amount of rice was proportional to how poor the cook was), only retaining the cabbage wrappings.

As you’ve already noticed, it is not only enjoyed by the Poles. Golabki is a delicacy globally, with different cuisines found in various regions including The Levant, Central Europe, Asia, Brazil, and Japan. Yet still, this cuisine also has variants and different names depending on the ingredients.

For instance, they’re called Sarma in Serbia, Croatia, Herzegovina, Turkey, and Bulgaria. The Moldovans and Romanians call them sarmale. In Russia, they’re called golubtsy which translates to little pigeons, just like golabki in Poland.  Ukrainians call their variant Holubtsil while the Slovaks and Czechs call them Holubky.

What brings in the difference is the type of cabbage and meat used in preparing this tasty delicacy and the type of sauce served with it.

For instance, Jews prepare their golabki by wrapping meatballs in cabbage leaves then serving it with a thick cream rather than a sauce. The Germans call an almost similar delicacy kohlrouladen.

Despite these differences, the traditional Polish golabki recipe remains the same and makes this great delicacy a favourite among the Poles.