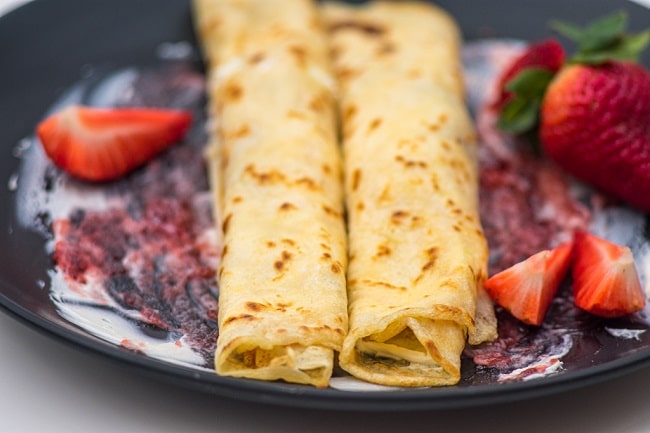 What is a Polish Pancake?

Depending on the Polish pancake recipe, the pancakes can either be savoury or sweet.

How do you serve Polish Pancakes?

The sweet Polish pancakes recipe usually has sweet fillings such as jams or fruits. On the other hand, the savory may have various ingredients like meat, cheese, mushrooms, ham, or sauerkraut. If you choose to use cheese fillings, the pancakes become nalesniki z serem, meaning ‘crepes with cheese.’

Depending on personal preference, nalesniki can have a combination of cinnamon sugar and cottage cheese fillings. When this is the case, then they’re referred to as blintzes.

The sweet version of Polish pancake is a favourite among kids and forms an essential part of many Poles’ breakfast. Besides being a breakfast dish, Poles also serve it at any time of the day since it’s simple to prepare. It’s a typical delicacy during the winter seasons in Poland.

Generally, Polish pancakes are thought to have originated from Central Europe. Today, they’re a delicacy all over the world as different cultures have their different version. In the US, they’re popularly known as blintzes.

The Polish pancakes were already prevalent in Hungary, Russia, Slovakia, and Poland, long before it became known to other countries around the 1800s. the Hungarians have sweet pancakes called palacsinta. In Russia and Ukraine, the pancakes are known as blini, and are made from buckwheat or wheat flour.

In Slovakia, the pancake is known as palacinky.  Palacinky is often made sweet and served with any toppings that go well with sweet crepes.

In France, they’re known as the French crepe, with the recipe containing mainly flour, eggs, and milk. French crepe can either be savoury or sweet and closely resemble English pancakes. The Indonesian serabi is a little different as its recipe consists of coconut milk, rice flour and is cooked distinctively on one side.

What Makes the Pancakes Polish?

The most common filling for Polish pancakes is cheese, and that’s what makes them Polish! The type of cheese used is the traditional twarog cheese, then egg yolks and sugar can also be an addition.

Fillings can be as many as desired. Other types of fillings are somewhat like those used in other regions. These may include jams, Nutella, berries, and whipped cream.

As we’ve already seen, twarog cheese is the primary filling on Polish pancakes. Twarog cheese comes from curd and is Poland’s predominant cheese. Twarog has a slightly sour taste but very delicious and satisfying.

The cheese is distinct to Poland and is often difficult to find it elsewhere. Due to its rarity, you can opt to use farmer’s cheese as a substitute, which has an almost similar taste but is less sour but crumblier. Other cheeses which are practically identical but cannot make great substitutes include the Italian ricotta, Austrian topfen, cottage cheese, and German quark.

Cottage cheese isn’t an excellent substitute for twarog cheese because it is sweeter, and its grains don’t clump. Quark, topfen, and ricotta are very creamy with a mild flavour.

Twarog cheese is common in most of the outlets selling Polish, Ukrainian or Russian foodstuffs.

Polish pancakes recipe makes them distinctive of Polish desserts. They’re neither too sweet, nor too savoury. If you like, you can top nalesniki with any fruit sauce, fresh berries, or warm jam. They’re even tastier with banana slices and Nutella!