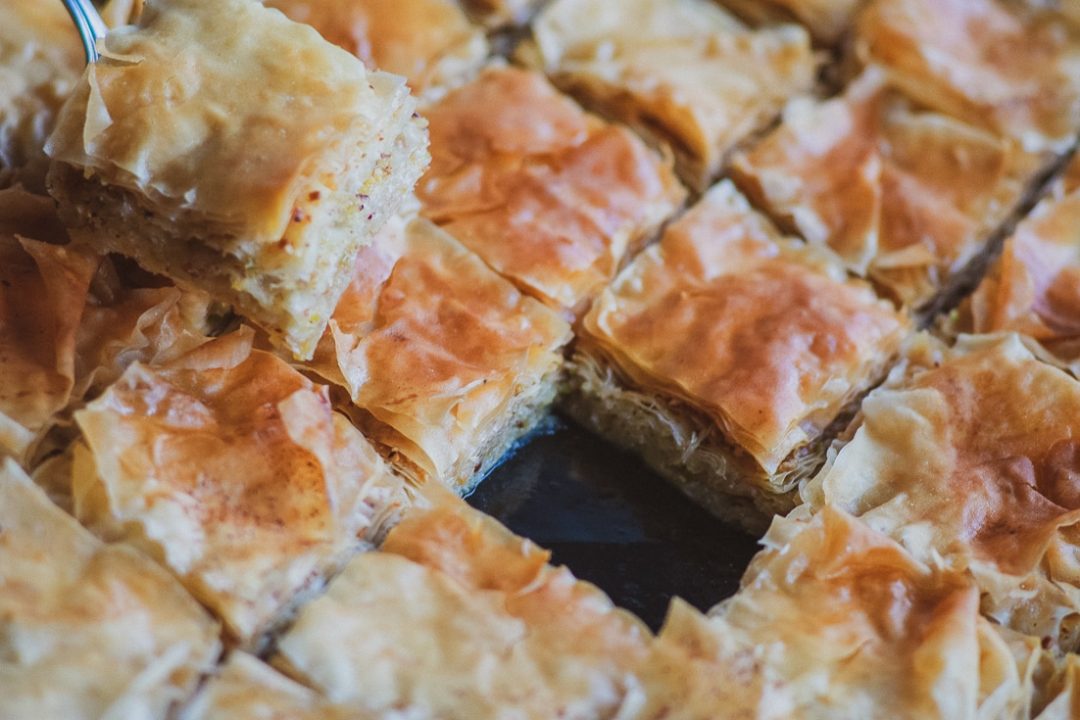 Baklava is a traditional and widespread Turkish delicacy made from filo pastry, topped with nuts and coated with sugar and/or honey syrup.

Baklava is a traditional Turkish delicacy made from filo pastry, topped with nuts and coated with sugar and honey syrup.

Although the origin of baklava is not clear, in Turkey believe they designed this sugar dessert. This is probably correct since they blended the influences of the Assyrian, Roman, Persian and Mongol empires.

Specifically, the first written records of baklava date from 1473 from the Topkapi Imperial Palace. The Sultan treated Janissary with baklava on the 15th of the month in a ceremony called the Baklava Alayı.

It is worth mentioning that up until the 20th century, it was a luxury delicacy, accessible only on special occasions. Hence the Turkish saying “I am not wealthy enough to have baklava every day”.

However, the origin of baklava can be traced back to the 8th century BC in the Assyrian kingdom. Specifically, they made a very similar cake of several levels of flatbread with a stuffing of grounded nuts in between, soaked in honey to seal.

In addition, in ancient Rome, there was a well-known dessert called placenta. Cato the Elder even left a description in his capital work De Agri Cultura from 160 BC:

Even today, a dessert called placenta, almost identical to baklava is still being made on the Greek island of Lesbos.

Thanks to Cato, we know placenta was popular in Rome, and therefore in other parts of the Empire. With the demise of the Western Roman Empire, the eastern part was maintained for another 1000 years, and within the Roman culinary heritage. Part of that legacy was baklava.

When the Ottoman Empire conquered Constantinople, present-day Istanbul, much of its legacy took over, and baklava was definitely part of it.

Like many other dishes, the Ottoman Empire was a medium that brought baklava to other parts of the world. That is why it is today a well-known and popular dessert in Greece and the Balkans, the Middle East, the Eastern Mediterranean as well as in Iranian, Arabic, Jewish and Armenian cuisine.

Many nations adopted baklava, each adding something their own. Probably the most significant contribution came from Greece. That’s where the filo dough was invented, which made the baklava look today.

However, in Turkey, baklava became an irreplaceable delicacy and in 2013 the EU awarded Gaziantep Baklavası Protected Geographical Indication.