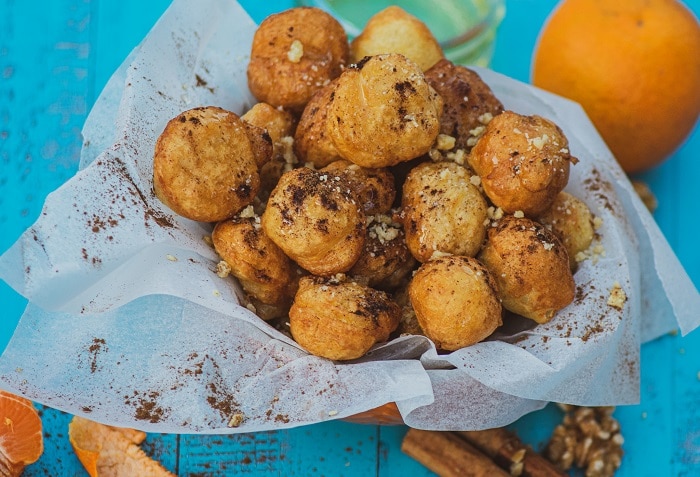 Loukoumades are a traditional Greek street food delicacy. It's a crisp and fluffy bite-sized type of doughnut. Sometimes you can find they are called Greek doughnuts.

Loukoumades are a traditional Greek street food delicacy. It’s a crisp and fluffy bite-sized type of doughnut. Sometimes you can find they are called Greek doughnuts.

They are usually served warm, sprinkled with honey syrup with cinnamon and chopped nuts or toasted sesame seeds. Recently, it’s not uncommon to find them with chocolate topping, jam, and even salty versions with cheese or yoghurt.

In all Greek cities, countless street shops are serving only loukoumades. They are especially popular during the winter. It is a real pleasure to walk down the street and smell the loukoumades, cinnamon and honey.

They have become so popular that in Greek there is a saying “Eisai megalos loukoumas!” or you are a big loukoumas. In a meaningful sense, someone nicely told you that you are not smart.

They first appear under this name in the 13th Century when writer al-Baghdadi mentions them in his book Kitab al-Ṭabīḫ. There he calls them “judge’s morsels.” Otherwise, Kitab al-Ṭabīḫ or The Book of Dishes is a capital work about the cuisine of the time.

The name itself comes from the Arabic word luqma meaning morsel. Let’s mention, in Turkish cuisine, there is an almost identical dish called lokma.

However, in Greece, they consider that loukoumades date back to ancient times. Some even claim it is one of the oldest desserts in the world. The Greek poet Callimachus mentions that the winners at the Olympics were honoured with “honey tokens”, or deep-fried dough balls with honey. At about the same time, the poet Archestratus mentioned them as enkris – or olive fried dough balls.

Apart from Greek and Turkish cuisine, these dishes are popular in other countries as well. They are extremely popular in the Arabian Peninsula, and as we mentioned, their name comes from there. Loukoumades are even mentioned in the famous One Thousand and One Nights.

They are also widespread in the Mediterranean. We only mention zeppole and struffoli in Italy, fritule in Croatia, zingoi in Israel.

I got this recipe for loukoumades a few years ago when I was in Thessaloniki.

Loukoumades’s origin from Turkey and it is Turkish desert. Meaning of “Lokma” is in Turkish “a bite of food”. Some religionous days Lokma desert hand out from near of mosque. Count Lokma is an idiom in Turkish language.

Loukoumas is a desert found in many countries around the Mediterranean sea,from Morocco all the way to Syria. There are various names and various deviations to the recipe. Instead of stating that loukoumas came from Turkey and making a full of yourself, you should be embracing that in this world, many countries have things like food to connect them.