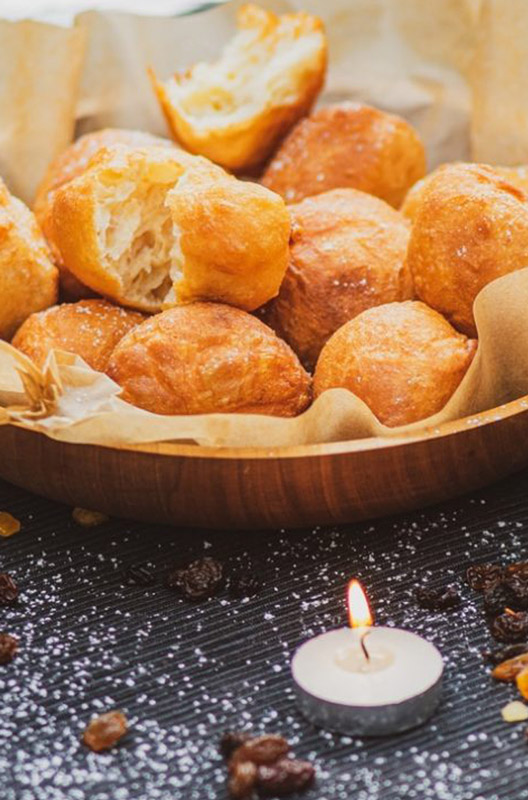 Uštipci is a very popular dish in Serbian cuisine, especially in Vojvodina, in the northern part of Serbia. These are small balls of dough, shaped like a doughnut and fried in oil.

Uštipci is a very popular dish in Serbian cuisine, especially in Vojvodina, in the northern part of Serbia. These are small balls of dough, shaped like a doughnut and fried in oil. Uštipci is so beloved that it can be served sweet or savoury, with or without sides, as an appetizer or a dessert. Sometimes it can even be the main course.
Very often you will find it served as an appetizer with cheese and cream. Uštipci is also popular as a treat, served with icing sugar sprinkled on top or with jam.

Besides Serbia, this dish is also known in other Balkan cuisines. In Bosnia and Herzegovina, it is sometimes referred to as peksimeti or locum. It is very similar to fritule in Croatia, but unlike uštipci, they are sweet and served as a dessert innhold. They are also popular in Macedonian, Montenegrin and Slovenian cuisine where it is better known as miške.

The origin of uštipci is not well documented. In different countries, there are different types of fried doughs, more or less similar to uštipci. Let’s mention oliebollen from the Netherlands, zeppole from Italy, beignets from France and krapfen from Austria. Even Yoitao from Japan and Mexican churros are very similar.

According to one theory,  uštipci originates from Dalmatian Zagora in Croatia. They were made here as a native version of the zeppole and from there spread throughout the Balkans.

The word  itself comes from the verb uštinuti, which can be translated as nip, tweak or pinch. In fact, the dough it is made of is very similar to bread dough, just a bit diluted. It is assumed that small pieces of this dough were nipped and fried in oil, hence the name.

As is the case with many traditional dishes, and for uštipci there are countless variations of recipes. You will find somewhere that baking powder is used instead of yeast, and some use yogurt.
We have opted for a more traditional variant. We got this recipe for uštipci from a friend from Serbia. For generations, her family has been making them in this way.