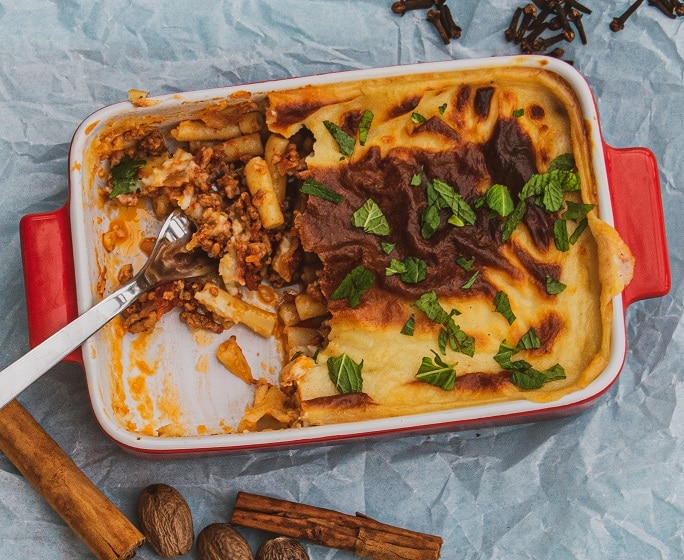 Pastitsio is one of the synonyms of traditional Greek cuisine today. It is one of those dishes that you will find in every gastronomic guide through Greece.

Pastitsio is one of the synonyms of traditional Greek cuisine today. It is one of those dishes that you will find in every gastronomic guide through Greece.

It’s actually a layered casserole made of round pasta and minced meat and tomato sauce, topped with a bechamel sauce usually with added cheese.

Because of its apparent similarity, it is sometimes referred to as the Greek lasagne. Although both are baked paste casseroles, there are significant differences between the two. Lasagne is made from noodle sheets, while pasticcio uses macaroni, penne, bucatini or other round pasta. Also, lasagne meat sauce is “Italian” while pastitsio uses more oriental spices such as cinnamon and cloves.

The word pastitsio comes from the Italian word pasticcio meaning pie. Over time it has also got the figurative meaning for “a mess”. In Italian cuisine, pasticcio is a common name for baked pasta casserole pies, while pastitsio-like dishes are called lasagne al forno meaning baked pasta. When it comes to pasticcio In Italy there are countless types and ingredients. They are made of pork, beef, even fish, some with added bechamel while others have pastry crust. For example, in the region around Venice is a very popular pasticcio of radicchio or artichokes with bechamel sauce.

Pastitsio in the present form in Greece was created at the beginning of the 19th century when it was “invented” by Nikólaos Tselementés.

He is probably the most prominent Greek chef and writer. Today, his name in Greece is synonymous with cookbooks as well as someone who cooks well. In the context of that time, influenced by Western trends and political circumstances, he wanted to distance Greek cuisine from Turkey. Therefore, he introduced French, Italian and western style of cooking in general. He introduced bechamel sauce, he introduced seafood soup (bouillabaisse), whipped cream, jelly recipes, canapés and the food decoration art in Greek cuisine.

Except in Italy, there is an almost identical dish in Egypt called Macarona béchamel. In Cyprus it is possible to find makarónia tou foúrnou, which also means baked macaroni. Also, in Malta, a very similar dish can be found – timpana.

I got this pastitsio recipe from a colleague from Thessaloniki who is also a foodie. He recommended that pastitsio goes great with Greek salads and red wine.