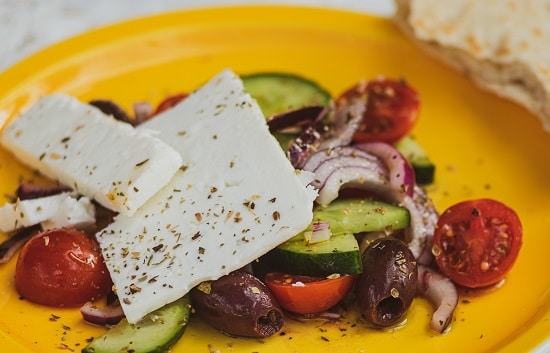 Greek salad is one of the symbols of Greek cuisine. It is a simple, refreshing and very healthy meal, consisting of only a few ingredients.

Greek salad is one of the symbols of Greek cuisine. In Greece, it is often called horiatiki (village salad) or therini (summer salad). It is a simple, refreshing and very healthy meal, consisting of only a few ingredients.

Traditionally, it is made using tomatoes, cucumbers, onions, olives and feta cheese, seasoned with olive oil and oregano. Often you can find versions with green peppers and sometimes with capers.

Where is Greek salad from?

It was created in the late ’60s or early ’70s in Plaka, a picturesque area in Athens. There, local caterers found ways to get around government fixed prices on tomatoes, cucumbers and other vegetables. To a salad made of fixed-price vegetables, they added feta cheese and so created a “new” dish.  However, this dish could charge significantly more to tourists. It seems it was created as an attempt to exploit a loophole in the law at that time.

There is a similar salad in Cyprus and, of course, it is called Cypriot Salad. In addition to the usual Greek salad ingredients, capers, parsley and lemon juice are added to this.

Thanks to Greek emigration, this salad has become famous in America as well. There, it has many variations, to the point where they have almost lost the original version. In America, it can be found with lettuce, pickled hot peppers, radishes, beetroots and even anchovies or sardines.

Greek salad is a dish in itself and is usually eaten as a main course, often paired with bread. It is sometimes served as a side dish alongside pasta, fish or meat dishes.

Since it is considered a meal, traditionally it is served on a plate or shallow dish – certainly not in a deep one.

This vegetable salad is a low-calorie dish, rich in Vitamin A and C. It also contains the necessary amounts of iron and potassium as well as antioxidants.

I got this recipe for Greek salad from a local in (tavern) when I was in Thessaloniki a few years ago.

There are no reviews for this recipe yet, use a form below to write your review
Close
Login to write a review
Forgot your password?
Pastitsio Spanakopita
Pastitsio
Spanakopita