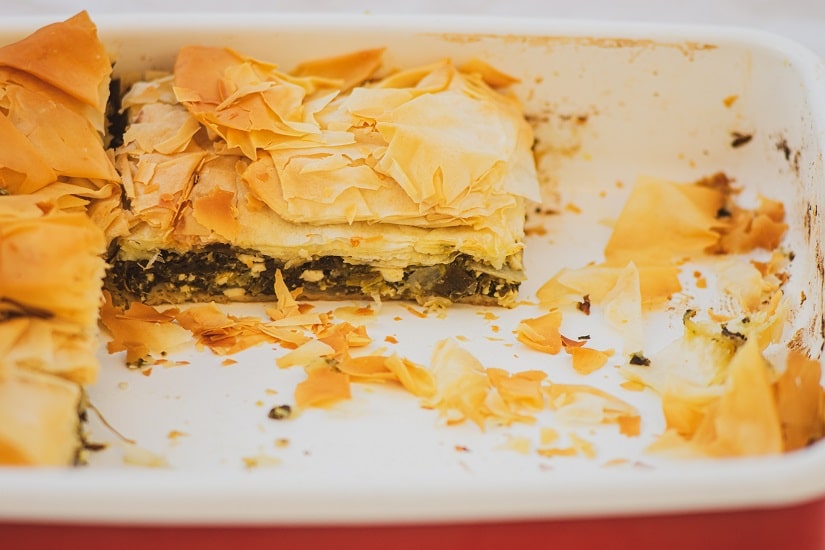 Spanakopita is such a popular dish in traditional Greek cuisine that it can be found in countless variations.

Spanakopita is such a popular dish in traditional Greek cuisine that it can be found in countless variations. It is very common on family dinner tables. You can find it in bakeries, local taverns and inns, and also on the menus of high-end restaurants.

What to Serve With Spanakopita

The dish is so popular in Greece that it is served hot or cold, as a snack or an appetizer. It can also be served as a light main course, often with a tzatziki dip. It can come as a baked casserole dish, as small triangular pies or even as rolls.

Spanakopita literally means spinach pie. It is a savoury pastry usually made of filo dough, spinach, onions and feta cheese. There are also horiatiki versions with a thicker crust which can be made from puff pastry.

There are fasting and vegan versions that are common during Lent or other religious fasts. Feta cheese and eggs are not included, but other vegetables such as leeks, parsley or celery are usually added.

Although similar pies existed in ancient times, it is believed to have originated in Turkish cuisine. During the time of Greek rule over the Ottoman Empire, many Turkish dishes became domesticated in Greek cuisine. Let’s just mention that there is a very similar dish in Turkish cuisine called ispanakli borek, but unlike spanakopita, it does not have cheese.

The cuisines of other Mediterranean and Balkan countries are familiar with similar dishes. In the Italian region of Liguria, especially during Easter, there is a Pasqualina cake. In Lebanon, there is Fatayer, a small pie that, in addition to cheese and spinach, also contains meat. Gibraltar also has its own version. In Macedonia, Serbia and Bosnia and Herzegovina, a very similar dish is popular, known as zeljanica pie.

I got this recipe for spanakopita at a local tavern several years ago when I visited Thessaloniki.