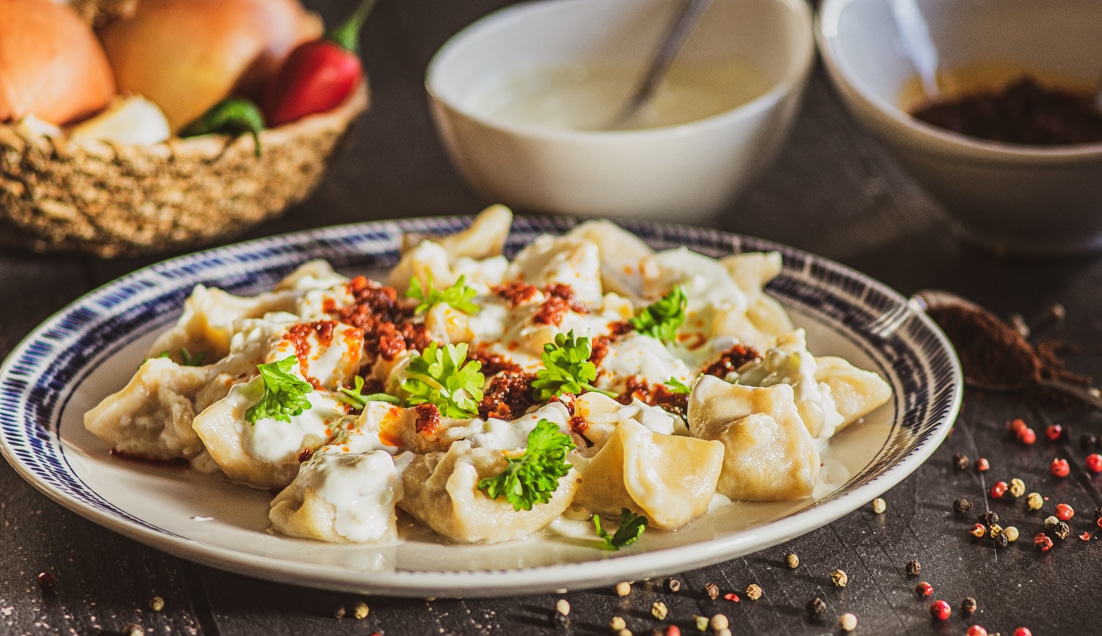 Manti is a traditional and widespread boiled dumpling dish in Turkish cuisine. Traditionally it is served with a yoghurt sauce and red pepper or tomato sauce.

Manti is a traditional and widespread boiled dumpling dish in Turkish cuisine. Traditionally it is served with a yoghurt sauce and red pepper or tomato sauce.

Similar dishes exist in other Asian and European countries. In Afghanistan, it is called mantu, while in Armenia and Georgia it is known as khinkali. This dish is also very well known in East Asia. A similar dish can be found in China, known as jiaozi.  There is also another dish called mantou, but it refers to another dish.

In Mongolia it is buuzas, in Tibet it is momo and in Japan gyoza.  While in Korea it even has a very similar name – Mandu.

Variations of manti exist in Europe as well. In Ukraine, it is Varenyky and in Poland Pierogi. A very similar dish is Italian tortellini and ravioli. In Bosnia and Herzegovina, it is called klepe.

Although there are no reliable historical records, it is considered manti originated in Mongolia during the 13th or 14th century. The first record of it, called mantu, is mentioned in the manuscript Yinshan Zhengyao from China. It was written by a certain doctor, Hu Szu-Hui, who served in the court of the Chinese Emperor during the Yuan Dynasty. The Yuan Dynasty is the other name for the Mongol rulers of China.

Along with the Mongol conquests and through Silk Road, manti extended to the west as far as the Ottoman Empire and Europe. Even today in Turkey, it is sometimes called the Tatar boregi, because Tatar is one of the names for the Mongols.

The first manti record in Turkey dates from the 15th century a cookbook written by Muhammed bin Mahmud Shirvani. Apart from manti, in the Ottoman Empire, there was a much more famous and very similar dish called ‘tutmaç’. ‘Tutmaç’ had no meat filling and was cooked in yoghurt-based soup.

Unlike similar dishes in other countries, in Turkey, manti should be made as small as possible. There is a tradition that, before the wedding, the mother of the groom comes to her daughter-in-law’s house. The bride is preparing manti for her, and the smaller it is the better. According to one tradition, one bride served 40 in just one spoon.

This manti recipe was given to me by a friend from Ankara. She has been preparing it this way for years, and I hope this one will be as good as hers.