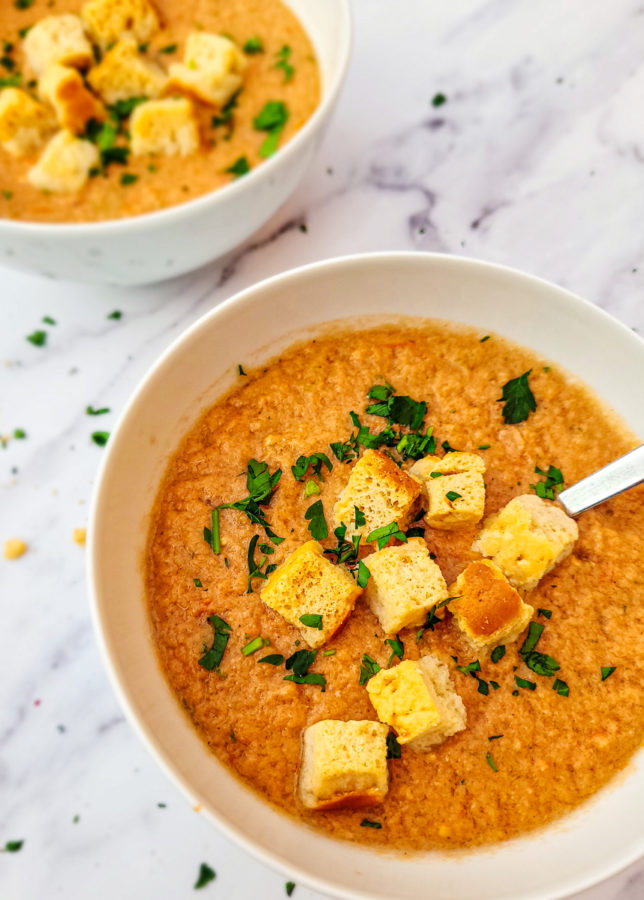 When blended right, gazpacho usually has a refreshing taste, packed with fresh off the garden flavour.

Andalusian gazpacho, or simply gazpacho, is a freshly blended soup prepared by mixing several fresh raw vegetables and blending them into a thick soup paste. Unlike other soups, the gazpacho recipe doesn’t involve any heating, so you don’t have to warm up the kitchen. Just gather the fresh juicy vegetable ingredients and blend a refreshing, delicious gazpacho.

Summers are that time of the year when fresh tomatoes pile up the markets, triggering the Spaniards to get ready to enjoy this authentic summer soup.

For those who understand Spanish cuisines well, you’ve probably had a chance to taste Salmorejo. It’s also a Spanish cold soup like gazpacho but only uses tomatoes and some garlic clove. You can serve Salmorejo in a bowl and use bread as its main ingredient, thus its pink-orange color and thicker texture.

What Can Best Accompany Gazpacho?

When blended right, it usually has a refreshing taste, packed with fresh off the garden flavour. It’s imperative to use the right ingredients with a proper level of freshness. Otherwise, it will have a lumpy cold salsa taste. Serve it cold and enjoy in Spanish summer.

Depending on preference, you can serve gazpacho with garnishes or on its own. The tomato soup can go well with garnishes like chopped ham, hard-boiled eggs, chopped almonds, or orange segments.

What’s also remarkable about this dish is that you can take it as a drink, seasoning or sauce, an appetizer, a dip, a starter, or a dessert. There are no restrictions to the time of the day to take the tomato soup.

Gazpacho recipe is believed to have been brought into Andalusia by the Romans and became Andalusian cuisine, especially in the Granada, Seville, and Cordoba regions. At first, it was simply a soup bread that used garlic, olive oil, vinegar, and salt. Later, people added tomatoes to the recipe to give its red colour. This final version has remained in place since the 19th century and is the present gazpacho enjoyed all over Spain.

Other theories narrate that the gazpacho recipe is homegrown, initially started in the southern Iberian Peninsula region of Andalusia. With the growing popularity, it became widespread, especially in Algarve and Alentejo regions. Today, it’s a famous vegetable soup in entire Spain and Portugal.  Salmorejo, ajoblanco, and porra antequerana are similar soups in Spain, although not as popular as gazpacho.

Depending on the region, the recipe has many different variants. In Portugal, people call their variant – arjamolho.

The modern variations have replaced tomatoes and bread with other ingredients such as avocados, grapes, watermelon, seafood, and meat stock.

A nice way to enjoy the peak of the warm summer with your stove off is to blend a cold soup. Ensure you get the freshest vegetable ingredients for your gazpacho recipe to make it a refreshing and satisfying treat.