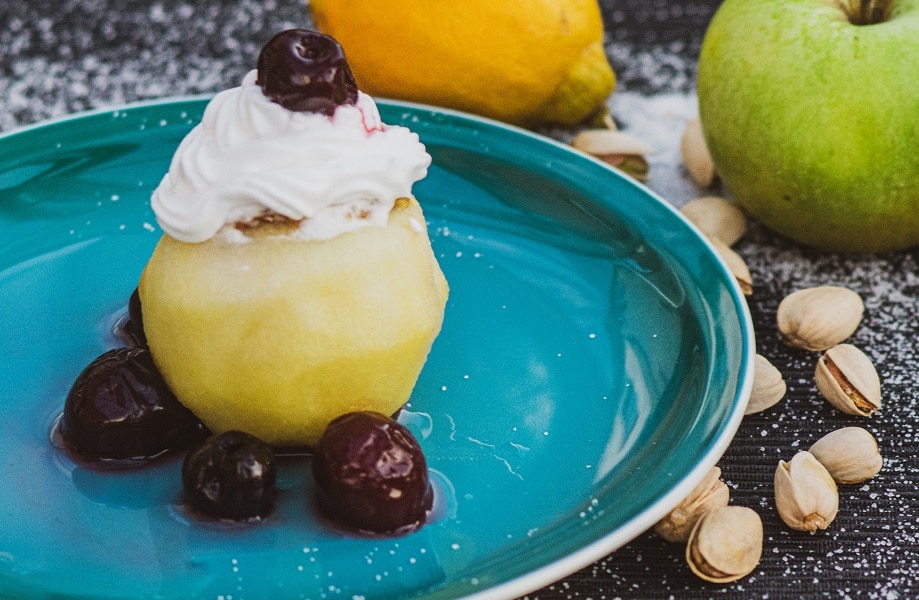 Tufahije is a dessert made of poached apples stuffed with walnuts or almonds and whipped cream.

Tufahije is, without any doubt, one of the most popular sweets of traditional Bosnian cuisine. Also, one of my favourite desserts of all times. In fact, this is a dessert made of poached apples stuffed with walnuts or almonds and whipped cream.

Tufahije is served cold, like dessert, with a cherry on the top. Traditional Bosnian coffee goes great with them.

The dessert dish came to Bosnia with the Ottoman conquests. The name tufahije comes from the Turkish word tuffāḥiye, or Arabic tuffāḥ meaning apple. Some consider tufahija to be native to Persia. Today one can find a similar morabay seeb dish made from cooked apples.

Tufahije just like other sweet specialities from Bosnia and Herzegovina, are mostly local versions of Turkish sweets. Thus, the story of dessert in the Bosnian cuisine cannot be imagined without the large amounts of sugar dressing (agda) in which the cakes swim, as well as without the bony fruits, nuts, hazelnuts, almonds, and pistachios.

The legacy of the Ottoman Empire in Bosnia and Herzegovina is still enormous today. It is estimated that there are over 8000 Turkish words in the Bosnian language today.

It is always fascinating to me, how to a large extent the culture and traditions of a nation can be reflected in its cuisine.

However, as much as they have in common with Ottoman or Persian cuisine, tufahije are special in own their way.

Apart from Bosnia and Herzegovina, tufahije are also known and popular in Serbia and Macedonia. A similar dessert exists in Bulgarian cuisine. It’s called pechani yabalki, and it’s made of baked apples.

This tufahije recipe, like other Bosnian sweets, is actually from my wife. It was passed on from her colleague Amira, with whom she studied. Amira is a Bosnian born in Sarajevo, and she is also a real foodie, especially when it comes to sweets.