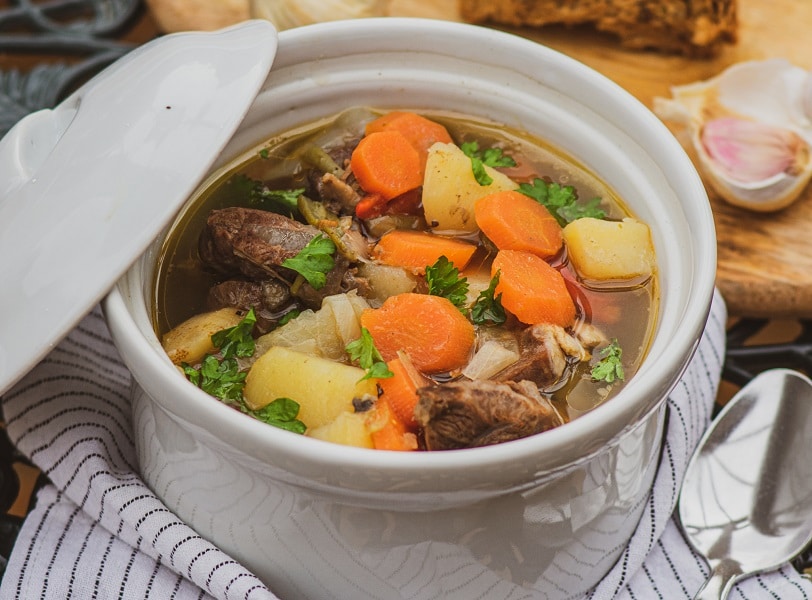 Bosnian pot or Bosanski lonac is the speciality of Bosnian traditional cuisine. This is a simple, but delicious and invigorating dish at the same time.

Bosnian pot or Bosanski lonac is the speciality of Bosnian traditional cuisine. This is a simple, but delicious and invigorating dish at the same time. Basically, it is a slow cooking stew made with meat and lots of vegetables.

As the adjective Bosnian suggests, it is one of the national dishes of Bosnia and Herzegovina. If you find yourself in Bosnia, definitely do not miss the Bosnian pot.

The method of preparation is an example of food preparation in Bosnia.  The most important characteristic of Bosnian cuisine is slow cooking and the fine-tuned ratio between vegetables, meat and spices.

As the case with many traditional dishes, there is no right recipe for Bosnian pot. The point is long and slow cooking of meats and vegetables you have available.

It is believed that the Bosnian pot dates to the medieval Bosnia when it emerged as a humble miner’s meal. The miners stuffed the meat and vegetables into a deep clay pot, which was then cooked on low heat for a long time.

Thanks to the simplicity of preparation and invigorating taste, it has expanded from the mining pits to Bosnian households. Over time, there were some local adjustments, but it retained its simplicity, richness and the way of preparation.

At a time when it was gaining popularity, people used to bring their filled pot to a nearby bakery in the evening. They would come back for it tomorrow morning after simmering in the bakery oven all night long.

Somewhere in Bosnia people are using the term winter or summer kalja. In winter kalja goes sauerkraut and smoked meat. On the other hand, in the summer kalja goes fresh cabbage and fresh meat, with stronger spices and herbs.

Bosnian pot is served as a dish for itself, without any side dishes. Since it is made from a lot of vegetables and cooked meat, it does not have a lot of calories and can be reheated. In fact, the more reheats, the tastier it gets.

This dish is so popular that it has a figurative meaning. Namely, when something is mixed out of order, it is said it is like a Bosnian pot.

I got this Bosnian pot recipe from my friend Amira from Zenica. According to her, her family has been preparing this dish for centuries in this way.