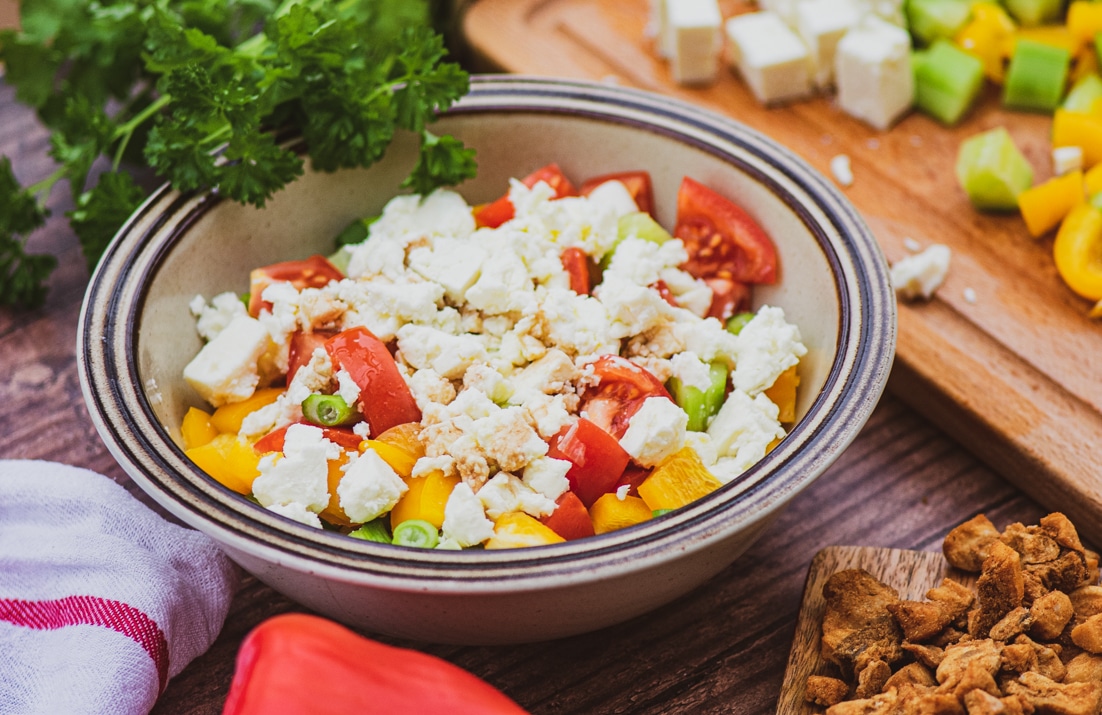 Shopska salad is a traditional dish of the Balkan, mainly from Bulgarian but Serbian and Macedonian cuisine as well. It is a very simple and refreshing salad that can be prepared quickly.

Shopska salad is a traditional dish of the Balkan, mainly from Bulgarian but Serbian and Macedonian cuisine as well. Sometimes is referred to as Bulgarian salad. It is a very simple and refreshing salad that can be prepared quickly. It is made from cucumbers, tomatoes, spring onions, peppers and salted cheese.

For me, it is a fantastic indicator of how gastronomy connects people and countries. A great example of how a delicious meal can be spread across the continent quickly.

The Shopska salad was made in Bulgaria. It is not a traditional dish whose origins date back several centuries. It’s actually the opposite. It was created in 1955 at the Chernomorets restaurant near Varna, on the Bulgarian Black Sea coast. It was created in an effort to improve the gastronomic offer of the Druzhba tourist resort.

However, during the time it became accepted in Serbia and has become an indispensable part of Serbian cuisine. In fact, there is also a Serbian Salad that is very similar. Namely, Serbian salad is made from the same ingredients, only without cheese.

Shopska salad is well known in other countries. In Romania, it is called Bulgărească salad, or Bulgarian salad, in the Czech Republic is Šopský salad and in Poland Sałatka szopska. In Albania it is known as the Sallatë Shope, and in Hungary the Sopszka saláta.

It is named after the Sopa tribe who lived in present-day Bulgaria, Serbia and Macedonia. Along with it,  other salads were created and named after the geographical regions of the Balkans. It turns out that Shopska salad has become absolutely the most popular.

During the 70s and 80s of the 20th century, it became a national culinary symbol of Bulgaria.

In 2014, the Online Contest “A Taste of Europe” was organized in the European Parliament. The Shopska salad recipe won by far the most votes and took first place. Right behind was a cold beetroot soup from Lithuania and sarmale from Romania.

This recipe for Shopska salad is very clear and simple, without many variations.

The https://www.worldfoodstory.co.uk website is one of the best we have
found, and the Shopska Salad (Šopska Salata) article is very well written and useful!

I want to share with you a link that also helped me a
lot in cooking: https://bit.ly/easy-fat-burning-recipes
Thanks and kisses! 🙂